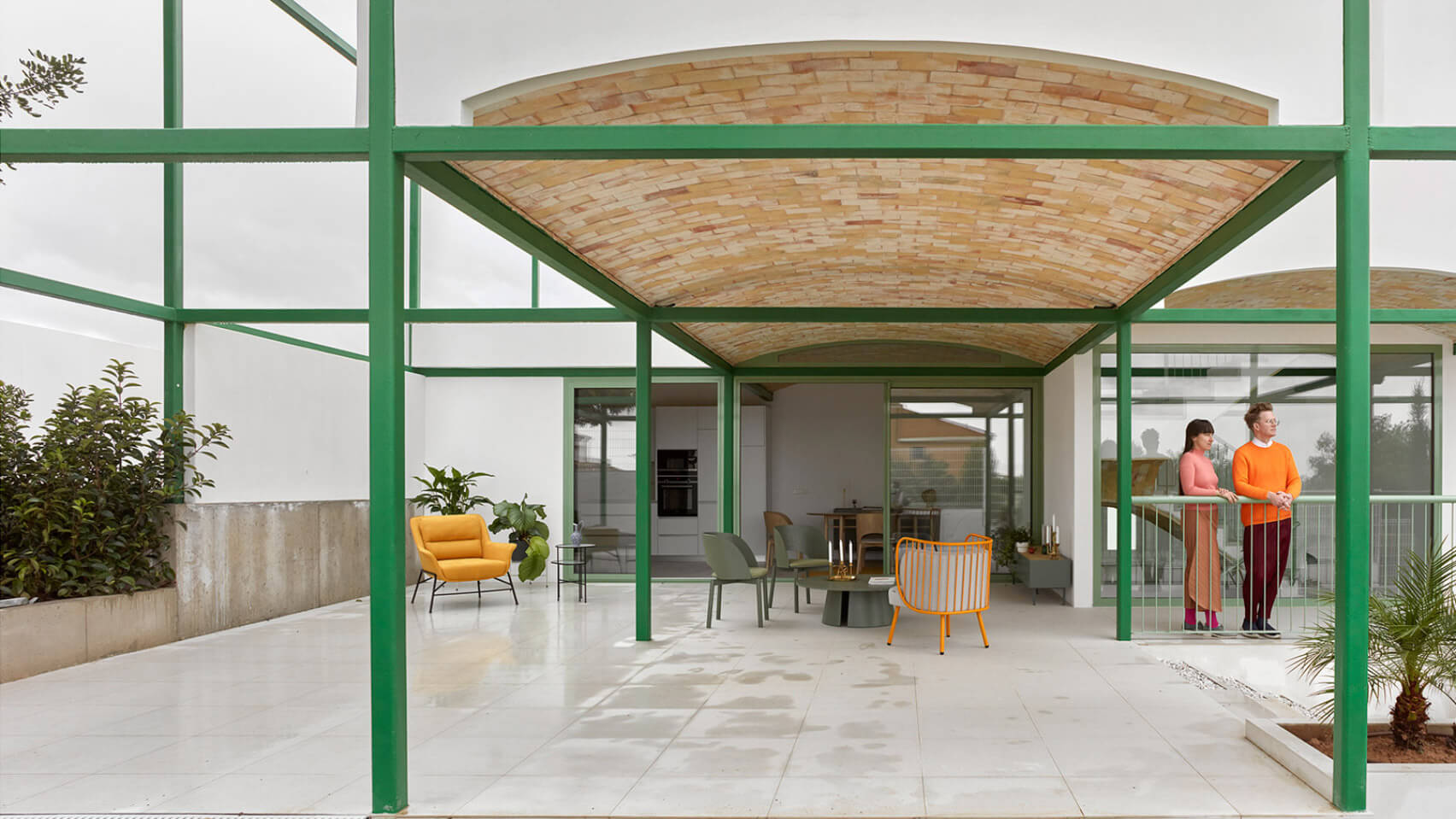 A steel space frame and brick arches combine in this prototype project in Valencia by Space Popular.

Brick Vault House is a striking new dwelling located in the suburb of New Santa Barbara in Valencia, Spain. The brief from the developer requested something ‘different’.

Why the Brick Vault House? To develop a distinctive model house that meets the typical medium house expectations and balances reproducibility with customizability.

It is a medium-large four-bedroom residence of 235sqm, which spans across three levels on a sloping block. The plan incorporates numerous paved outdoor areas, some of which are protected by the floor above.

The project has been completed in conjunction with local architects, Estudio Alberto Burgos and Javier Cortina Maruenda. The interior of the house was designed by the developer and the images feature furniture by local Valencia design brand Teulat.

Space Popular was founded by Lara Lesmes & Fredrik Hellberg in Bangkok in 2013 and has been based in London since 2016. Lara is originally from Spain and Fredrik from Sweden. They both graduated from the Architectural Association in London.

Space Popular is a research and design practice that works across a wide variety of scales and media. They create projects in architecture, products, furniture, graphics, interfaces, and research.

Their work includes numerous academic projects, as well as exhibitions and built projects. The pair also have extensive teaching experience. They have lectured at the INDA in Bangkok and the Architectural Association in London.

There is a strong conceptual basis to their approach. They have submitted a range of intriguing proposals to architectural competitions, and exhibited a new structural system in engineered wood at the Venice Biennale in 2018.

Recently, Space Popular put together a fabulously colorful exhibition called Freestyle: Architectural Adventures in Mass Media which is showing at the RIBA until mid-May 2020.

Materials have been inspired by and selected from those commonly used in Spanish buildings. These include brick, steel, and plaster.

The distinctive structural steel frame doubled as scaffolding during construction. Complementing the steel frame, windows and railings used throughout are also metal.

Large windows and floor to ceiling glass doors allow ample light to enter and filter throughout the interior.

The floor plate within each steel grid is supported from below with an arched brick vault. The exposed brick arch work also features under the stairs.

Style & Aesthetics – Light and modern with a touch of tradition

The most distinctive aspect of the house is the grass green steel grid which serves to unify the whole project. Rooms, outdoor areas and the central staircase all adhere to the grid and are slotted neatly within.

The steel is 10cm x 10cm and each grid is 3.75m x 3.75m and 3.16m high. The grid extends beyond the exterior of the house, with the unoccupied grids still marked out by the steel frame.

Walls inside and out are a clean white. The steel frame is also prominent in the interior, where its green lines are visible running across the ceilings, above the windows and between rooms. The green color is followed through in softer shades in the window frames and railings.

The creamy orange bricks contrast with the green and white. They offer a handcrafted texture that echoes traditional Spanish architecture and adds lightness to the spaces.

Surprisingly, the brick vaults under the slabs were constructed without any supporting formwork.

They have a gentle arched slope to them and were put in place using gesso that had dried just the right amount. The dryness of the bricks allows them to grab and hold in place.

It is a technique which was used prominently by Valencian architect Raphael Guastavino. He famously exported the style to the United States, where it can be seen in many well-known buildings including Grand Central Terminal in New York.

Design memento – A simple system which allows for repetition and variation

The grid of the Brick Vault House is an efficient means of achieving reproducible design modules. This project has been conceived not only as a single house but sets out a style and system that can be repeated.

As the designers explain the approach: “We suggested a grid system, with which we could resolve the typical details that would allow them to create different configurations in the subsequent houses, avoiding replication but still maintaining some level of standardization.”

The strict grid gives the project a modernist and experimental air. By including the redundant grid elements it recalls the work of Peter Eisenman, as well as the more contemporary projects of Sou Fujimoto.

The plan makes very good use of the compact plot of land and is able to create many spaces that can be easily separated for privacy. The shifting of the indoor footprint from one level to the next and the outdoor living areas on every level further increase the interest, versatility and livability of this dwelling.

Santiago Calatrava is the neo-futuristic architect of organic, zoomorphic buildings

To him, architecture responds to environmental factors and functional outputs, even if the true purpose of his dramatic design is typically more aesthetic than structural: Santiago […]

Carbon dioxide is captured in the charred timber fabric of the building and actively removed from the atmosphere. The london-based architectural and design studio Koto has […] 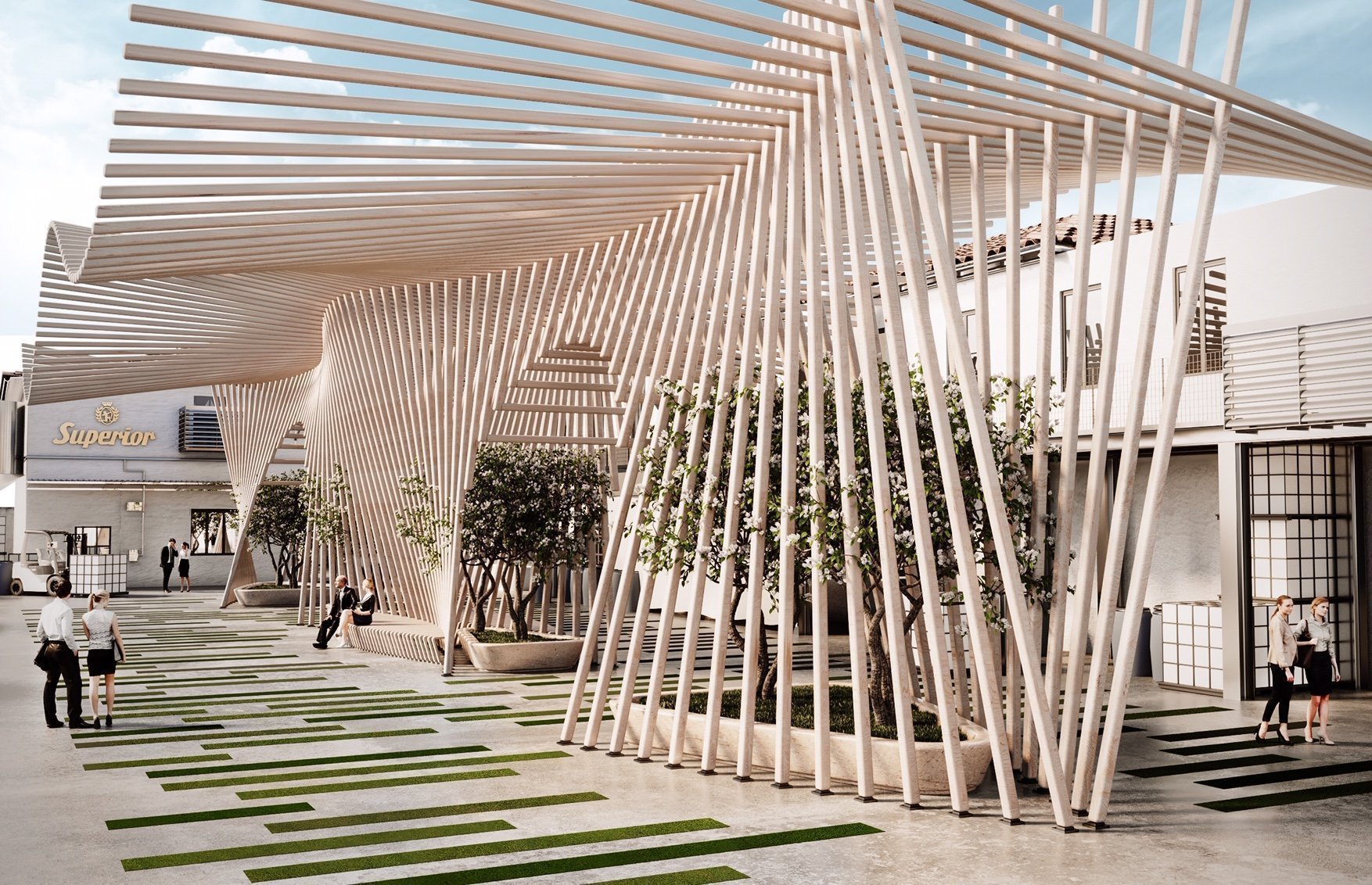 “Analyzing the past and present of the Superior Tannery we have chosen to develop the architectural project starting from two inputs directly linked to the skin: […]