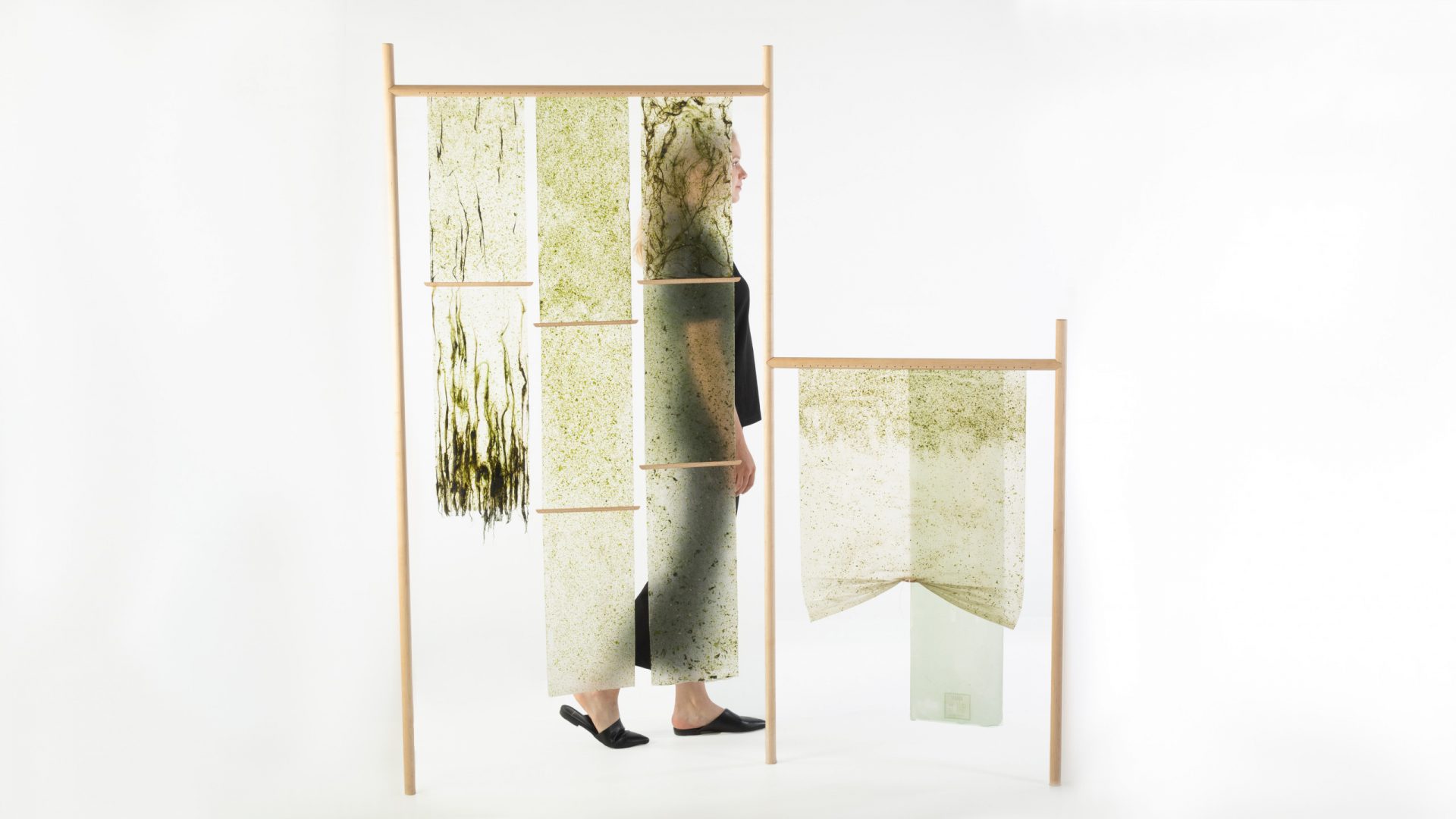 SEAmpathy focuses on the biophilic experience and natural aesthetics to create innovative materials made of algae.

Imagine a world in which we harness nature in favor of man without harming it. Wonderings upon our consumption habits and a vision for a well being that is more beneficial for both the planet and mankind have led to a design process that explores algae as a catalyst for a perceptual change.

SEAmpaty Displays objects with a lot of respect and love for nature, which on one hand Trying to cultivate the Algae, and on the other, maintaining the Algae inner world of concepts – smells, textures, and unique connotations.

Biophilia believes that human beings have a natural tendency to make connections and relationships with nature, and sees nature as a major component in stimulating our senses throughout evolution. The project focuses on the Biophilic experience and natural aesthetics with objects that offer two approaches which create a hybrid between land and sea – YAMA and MAYMA.

“YAMA” – A partition that proposes an implementation of the algae as a versatile sheet with potential for recycling and industrialization. Out of circular design and zero waste approaches, that tries NOT to produce more junk. I created biomaterials that can be use and reuse by repeating the process of its “cooking”.

At the end of the life cycle of the new sheets, it can be used as raw material for new casting, or return it to nature. In this way, the material preserves its contents and properties, and allows maximal utilization of the material and minimal environmental impact.

“MAYMA” – Reconstruction of the algae for a configuration of living fibers that sustain photosynthesis. During my project, Materiability collaborates with Weizmann’s institution for science and worked at Dr. Filipe Natalio’s lab for researching and developing methods for creating living matter. The purpose of the experiment was to create a manipulation for a living microscopic algae culture while preserving it in life.

After many attempts and development time, Materiability has reached the accuracy required to produce a shell for the algae that on the one hand allows the material to transforms into a formation of spheres or fibers and on the other hand allows gas exchange and the continuation of living material.

A good analog for the Materiability approach with MAYMA it’s the Bonsai tree (which is not a pygmy tree, but a tree carefully trimmed by its roots and branches to keep it small). Like the Bonsai, the living fibers preserve the tension between nature rules and the manipulation I apply on the material.

The project provides a green alternative to a matter and seeks to bring man and nature together by examining the relationship between them, and giving man an active role in growing and recycling the object. At the same time, Biophilic values that come up through the objects, creates sort of inner peace, and by it weakens the urge to consume more and more, which leads to healthier and better consumption habits among us.

For the last few months, Materiability was establishing a collaboration together with “OVO Design” – a new Polish interior design brand. Together they worked on the design and implementation of the algae made sheets that Materiability created as part of the SEAmpathy project. The idea was to integrate the sheets as part of natural wall panels, that on one hand taking few steps forward “commercializing” the bio-sheets and aiming to work with bigger companies and architects around Europe, and on the other hand, keeps the core values of SEAmpathy such as sustainability, biophilia, and ecology. ​​​​​​​ They have launched two lines of the design, which are based on basic measurements of 1m on 1.5m.  These basic “boxes” allow them to adjust the panels to a specific space wall and create a custom-made design by multiplying the amount of the boxes and play with the patterns and compositions.

These two designs were just presented at the Warsaw HOME fair at the beginning of October.