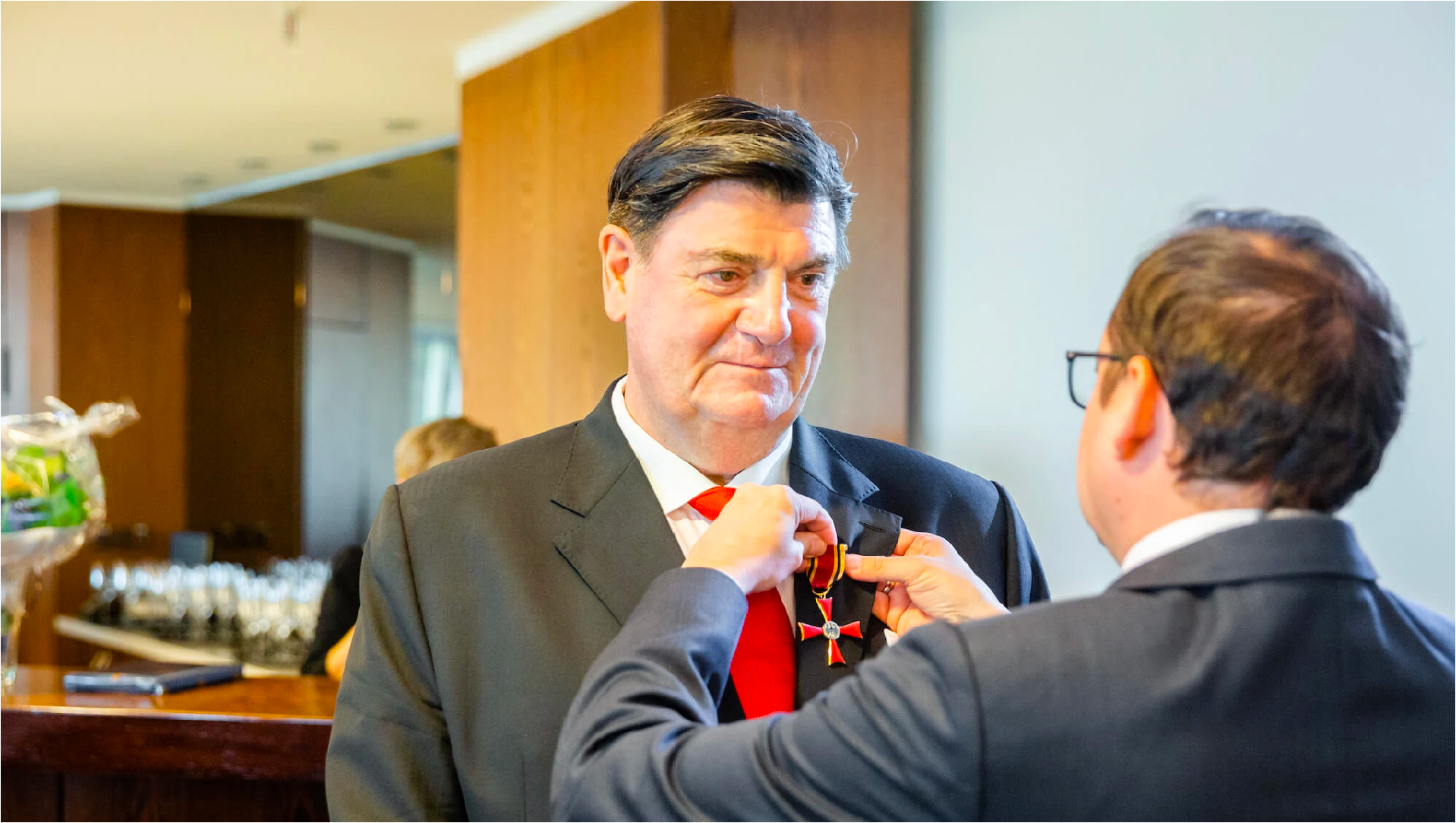 On 9 August 2019, Founder and CEO of the Red Dot Award Professor Dr. Peter Zec was awarded the Cross of Merit on the ribbon of the Order of Merit of the Federal Republic of Germany for his contribution to the design discipline by German President Frank-Walter Steinmeier.

This honor stemmed from a proposal by Minister President of North Rhine-Westphalia Armin Laschet.

Zec has transformed the Red Dot seal of quality into an international symbol of award-winning design quality, thus facilitating access to such award-winning quality for those interested in design.

He accepted the distinction from Essen’s Lord Mayor Thomas Kufen at a ceremony held on 19 December 2019.

During the ceremony in Essen’s City Hall, Thomas Kufen thanked the design expert for his decades-long involvement in the field of design culture. Peter Zec accepted the award in the presence of friends and colleagues.

The distinction has a special meaning for him in terms of his background in particular: “Although I was born in Germany, part of my roots are elsewhere, as my father is from Bosnia and my mother is German. I am therefore especially proud to receive this award from the Federal Republic of Germany. Red Dot would not be where it is today without those who have accompanied me over many years. I would like to thank them sincerely.”

The Order of Merit is awarded in recognition of and as a tribute to individuals for services to the nation. It can be awarded for achievements in the political, economic, social or intellectual realm and for all kinds of outstanding services to the Federal Republic of Germany.

In establishing the Red Dot Award, Peter Zec succeeded in using an award for good design to create an international brand. Each year, outstanding designs are selected as part of the international design competition, which comprises the areas of product, communication and brand design as well as prototypes, and are given a Red Dot.

Through the Red Dot Design Museum at the Zollverein UNESCO world heritage site, Zec has also put the City of Essen on the map as an internationally recognized design location.

Under his leadership, Design Zentrum Nordrhein Westfalen has become one of the world’s most important and high-profile design institutions. In addition to his role as Managing Director of Red Dot, Peter Zec is also an author and editor as well as a design advisor and speaker who is sought after all over the globe.

Accomplishments beyond the Red Dot

The Red Dot Award is not his only achievement in shaping the world of design – from 1999 to 2005, Peter Zec was also an honorary member of the Executive Board of ICSID (International Council of Societies of Industrial Design). In 2005 he was the first German to be elected President of the organization for the two-year term, and he initiated the “World Design Capital” program.

He was President of the International Design Alliance (IDA) for one year from October 2006. Along with his role as ICSID Executive Board member, this meant that he simultaneously occupied the two highest-ranking offices in the design community. As an ICSID Past President, he has been a life-time Senator since 2007 and is consulted on all important matters concerning the organization.