Tainan Spring – An urban pool in a deconstructed mall 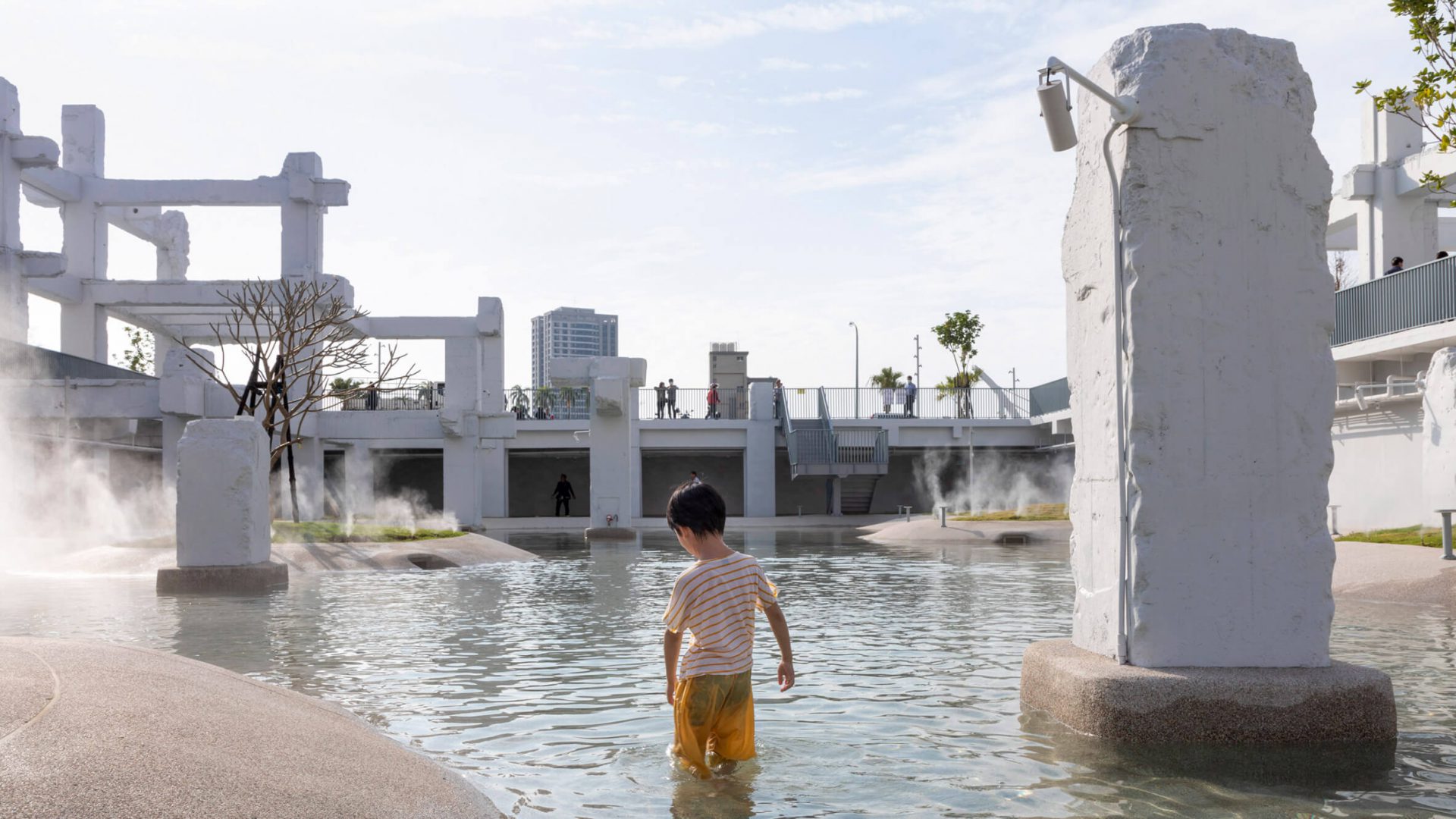 In 1983, the China-Town Mall was built on top of the old harbour next to the Tainan Canal (which once was an integral part of the city’s marine and fishing industry). Since the rise in online shopping, China-Town Mall was neglected which left a void in the vibrancy of downtown Tainan until MVRDV pulled out the plug.

Why Tainan Spring? To transform an un-used shopping mall into a public water park for local families

MVRDV worked closely with the city of Tainan to restore the life of this central location and give it back to the local community. Much of the mall was recycled, which made this project a prime example of how the waste of existing architecture can be reduced through an innovative circular economy.

The minds behind Tainan Spring – MVRDV

Founded by Winy Maas, Jacob van Rijs and Nathalie de Vries, MVRDV are a Netherlands based architecture practice providing contemporary architectural designs that play on urban issues across the world. Their work focuses on developing cities towards a positive, community-orientated future.

The Tainan Spring is one of two projects set for completion by MVRDV in Tainan this year. They are also designing an undulating farm terrace on the rooftop of a food market, which is part of a wider master plan to rejuvenate the area and mimic the surrounding natural Taiwanese landscape.

The remains of the China-Town Mall are now ornamental ruins within the sunken park and public pool which forms the Tainan Spring. This rejuvenation project aimed to flood life back into this redundant space and allow new generations to swim among the history of the city.

The pillars from the past that are scattered throughout the Tainan Spring are a sombre shade of grey, so to brighten the sunken public plaza the architects planted a baby jungle in every possible location to breathe the natural landscape Taiwan into the city.

By combining the materials from the past with the natural world, MVRDV created a community hub for all generations to connect with, together.

The concrete jungle is a constant reminder of the Mall that closed a historic port. The whole design of The Tainan Spring is embedded into the Mall’s former underground car park, with plants and play areas all made from the foundations of the Mall.

The urban pool was carefully considered for use all year round. In response to the dry seasons and rainy seasons, the water level will rise and fall and during hot weather, mist sprayers will provide a cool relief for visitors.

The Tainan Spring was commissioned by the Urban Development Bureau, to breathe a new lease of life into this area, for the public. One key part of the strategy devised by MVRDV was to bring more greenery into the heavily concreted surroundings, so the architects introduced some local plant species throughout the Tainan Spring.

The large sunken pool is a beautiful way to visually represent the history of this location, which teaches the new generations about the various transformations the urban lagoon has been through.

Large pillars from the past protrude from the ground, which were the foundations of the Mall, to mark the presence of what once stood here, while the pool is a gentle nod to the Tainan canal and harbour that once occupied this space.

How the architects used the existing foundations of the Mall is an incredible skill of recycling something old and manipulating it into a beautifully modern, functional space. It reminds me of the Cheonggyecheon Stream, an 11km long stream that runs through downtown Seoul that was also designed as part of an urban renewal project to improve the amount of ‘green’ spaces in the urban areas.