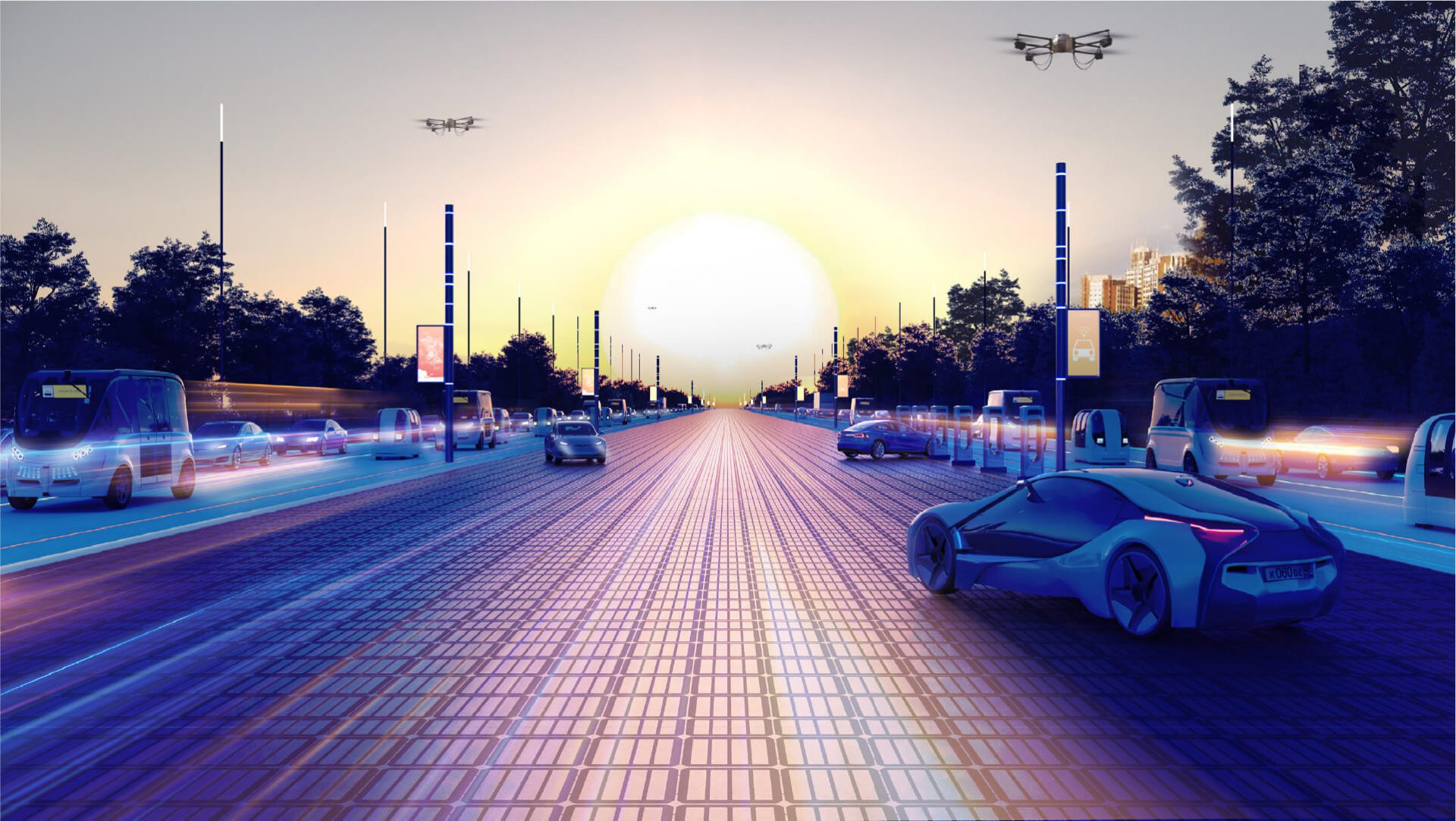 Carlo Ratti envisions the future of urban spaces and mobility through the integration of data to create interconnected infrastructures for a better, intelligent city.

Rapid changes in technology and changing patterns in travel behavior are having a significant impact on the future of urban spaces and mobility. Because the ability to move within and between urban places is a crucial part of our social, economic and environmental vitality, the development of integrated and ‘smart’ systems for moving people, goods and information is the main focus of many designers today, especially for one in particular, Carlo Ratti. The Italian engineer, architect, educator, and inventor is the founder of his namesake innovation and design firm, Carlo Ratti Associati, and the director of the MIT think-tank, Senseable City Lab.

There is no other word that represents Carlo Ratti’s vision and ideology of the future of cities than ‘senseable’. For him, creating the city of the future is more than a profession, is a passion and it is shown through his work at the MIT Sensible City Lab, where alongside some of the world’s sharpest minds, he studies human interactions within urban spaces, and how digital information and interfaces can shape and enhance them.

He believes the use of new technologies will allow urban spaces to become more environmentally suitable and even more responsive to their inhabitants’ needs, and it is through his constant research, innovation and writing that Ratti advocates the concept of a ‘real-time city’, where layers of networks and digital information blanket urban spaces.

In Ratti’s future city, buildings, streets, transportation, and objects will sense and respond to our smartphone-equipped society using data and powerful algorithms. As part of Mobility Week, DesignWanted interviewed Carlo Ratti and found out more about the future of urban spaces, mobility, using the city as a lab, and his optimism and fascination with the zestfulness of urban life in an ever-more connected time.

As the director of Senseable City Lab at MIT you study how design and science come together to shape the future of urban spaces. What have you been researching in relation to mobility?

Carlo Ratti: “Ever since the Senseable City Lab (SCL) was established, mobility has been an integral part of our research. We have been exploring it through two different lenses: products and data.

One example in the product design category is the Copenhagen Wheel, which was born from our collaboration with the municipality of Copenhagen in 2009 and now developed by startup Superpedestrian. Starting from the Wheel, Superpedestrian has developed into a key player in micro-mobility.

In terms of data, our HubCab project in 2013 took data from over 170 million taxi trips in New York City. We then analyzed the existing patterns and future potential of collective mobility. This effort started a collaboration with Uber, around UberPool and Express POOL. Ride-sharing systems like this could help keep the number of cars on the road at a lower level – hence resulting in less congestion and pollution.”

What do you think are the main pain-points and issues to be solved in relation to mobility, either on an urban scale and on long distances?

Carlo Ratti: “The problems of infrastructure are generally not related to capacity, but to peaks. So if we use our resources flexibly we can address such issues – especially after the Covid-19 experience that has injected much flexibility into how we organize our lives.

Digital platforms can provide the right incentives. A possible idea is the model set forth by Singapore, as the residents there are incentivized to commute off-peak hours; or we could adopt a slot-based system where citizens could trade their slots with each other in using the road. To put it simply, less asphalt, more intelligence is the way to go.”

What role is data playing in reshaping mobility? What impact can we expect from interconnected vehicles and infrastructure?

Carlo Ratti: “The key idea is to create feedback loops, which allow a better use of the infrastructure. I see that there is a jam and I take a different route – or I travel later and in the meanwhile do what I need to do via Zoom.

Data can also help us invent new types of infrastructure – such as a city without a traffic light. The flow of traffic would be dictated by the sensors installed in the self-driving cars, as they communicate with one another in real-time. Road crossing at intersections would be managed by a slot-based structure similar to air traffic control. When a car is approaching an intersection, it would automatically inform the traffic management system to request access. A specific time slot would then be assigned to the car to move forward. Besides the change of the hardware, an improved Internet infrastructure should also be in place to facilitate constant communication among the cars themselves and the system of road management. This would be an essential component to carry out the scenario with stability.”

What is your take on autonomous driving? What are the greatest challenges that prevent it to become reality?

Carlo Ratti: “In general, I prefer micro-mobility and other alternatives to cars. However, autonomous cars have potential, especially employed in conjunction to car-sharing and ride-sharing systems: you can imagine a future in which a car takes you to work in the morning and gives a lift to someone else in your family, or anyone else in the society, in the afternoon. Since they would be occupied by different people at different times, much fewer cars would be needed in a given city. The same goes for the parking space to accommodate them. This in turn would produce less congestion on the roads and a smaller environmental impact.

The biggest challenge for this scenario to be realized occurs in the planning phase. As the founder of ZipCar Robin Chase wrote a few years ago, “simply eliminating the drivers from cars, and keeping everything else about our system the same, will be a disaster.” City administrations have to consider different perspectives to avoid any blowback – for instance, the cost of traveling a mile might drop so substantially that people would abandon public transportation altogether in favor of autonomous cars, resulting in more vehicles in the city. The right incentives such as congestion charging and free mass transit in place would guide citizens to act responsibly and make it easier to introduce autonomous cars into daily life.”

From an urban planning perspective, how could municipalities and public institutions intervene to support the evolution of mobility?

Carlo Ratti: “Cities should promote experimentation: urban tech means using the city as a lab. The next few years are an important time for experimentation, but city governments should communicate with citizens to educate them about tolerating failure.

This means allowing ideas and innovations to be tested by people and using feedback loops to take users’ responses into account. In short, we could say that beyond refining the urbs, the public sector should also ensure the civitas stay active, i.e. giving stake to citizens in the discussion.”

Electric power, ride-sharing & on-demand services, autonomous driving, interconnected vehicles: among the many tech-based innovations reshaping mobility, which ones do you consider currently still unexplored but with high potential?

Carlo Ratti: “If we look at the statistics, cars are left idle approximately 95 percent of the time. That immediately puts them on the top among the mobility resources in need of optimization. Sharing is a sound solution. Rather than each person owning a vehicle, using it perhaps twice a day and leaving it parked for the remaining twenty-three hours, a much smaller number of communal cars can satisfy the overall mobility demand – it has been estimated that every shared car can remove between ten and thirty privately owned cars from the road. Such knowledge could give birth to (and have already given birth to) many opportunistic initiatives, taking advantage of the existing infrastructure to bring us closer to that ideal state.”

If you were to look for a new topic of research in mobility, which technology would you focus on? Which mobility-related technology is very promising but still not enough explored?

Carlo Ratti: “While progress has been made in the development of the independent mobility options, it is equally important to set up a communicational platform to orchestrate their concurrent operation: it is what we call a “moving web” scenario.

The idea is to inform passengers the traffic conditions and the performance of various choices in real-time, so they can pick the most appropriate mode of transportation for any given circumstance: with one single booking commuters might bike to the station just in time to catch a train, and then have an autonomous car waiting for them at the station, ready to drive the last mile. They should also be able to use one single App to look, compare, and book all different options.”

How do you think the current health crisis will affect the future of urban mobility? Will there be any radical changes in the way people move around in and out of metropolitan areas?

Carlo Ratti: “To quote the famous words of Rahm Emanuel, “Never let a crisis go to waste.” If there is any takeaway from the pandemic, it would have to be the change of social norms in a professional context. We were so used to the physical presence that if you were there on location, things did not happen – it happened to me in the past to be living in New York and fly to Singapore for a meeting and fly back in just a few hours’ time. This kind of absurd practice comes at a huge personal and environmental cost.

Throughout these past few months, we have learned that we can conduct meaningful meetings via digital platforms with our foreign counterparts. I hope this culture is here to stay, and we can cut down all the unnecessary trips as a result.”

As the leader of a design and innovation studio, Carlo Ratti Associati, what is one project that you would want to work on to improve mobility?

Carlo Ratti: “In exploring the relationship between mobility and urban space, we co-curated the exhibition New Deal last year to imagine Paris in 2050. We believe the mobility evolution would be a primary vehicle (pun intended) in reshaping the city. For instance, the lanes of the “Boulevard Peripherique” could be cut down by half, with the newly reclaimed space repurposed into reconfigurable playgrounds.

Sustainable housing units would be placed over the Peripherique to be a link between the historic center and the banlieues. Moreover, some other existing roads and suburban highways could be transformed into energy generation surfaces. Projects like this allow us to start a crucial conversation with citizens, through which we discover a clearer path to move forward.”

If you are interested in how architecture affects mobility, don’t miss Rethinking mobility to design better cities with Max Schwitalla.