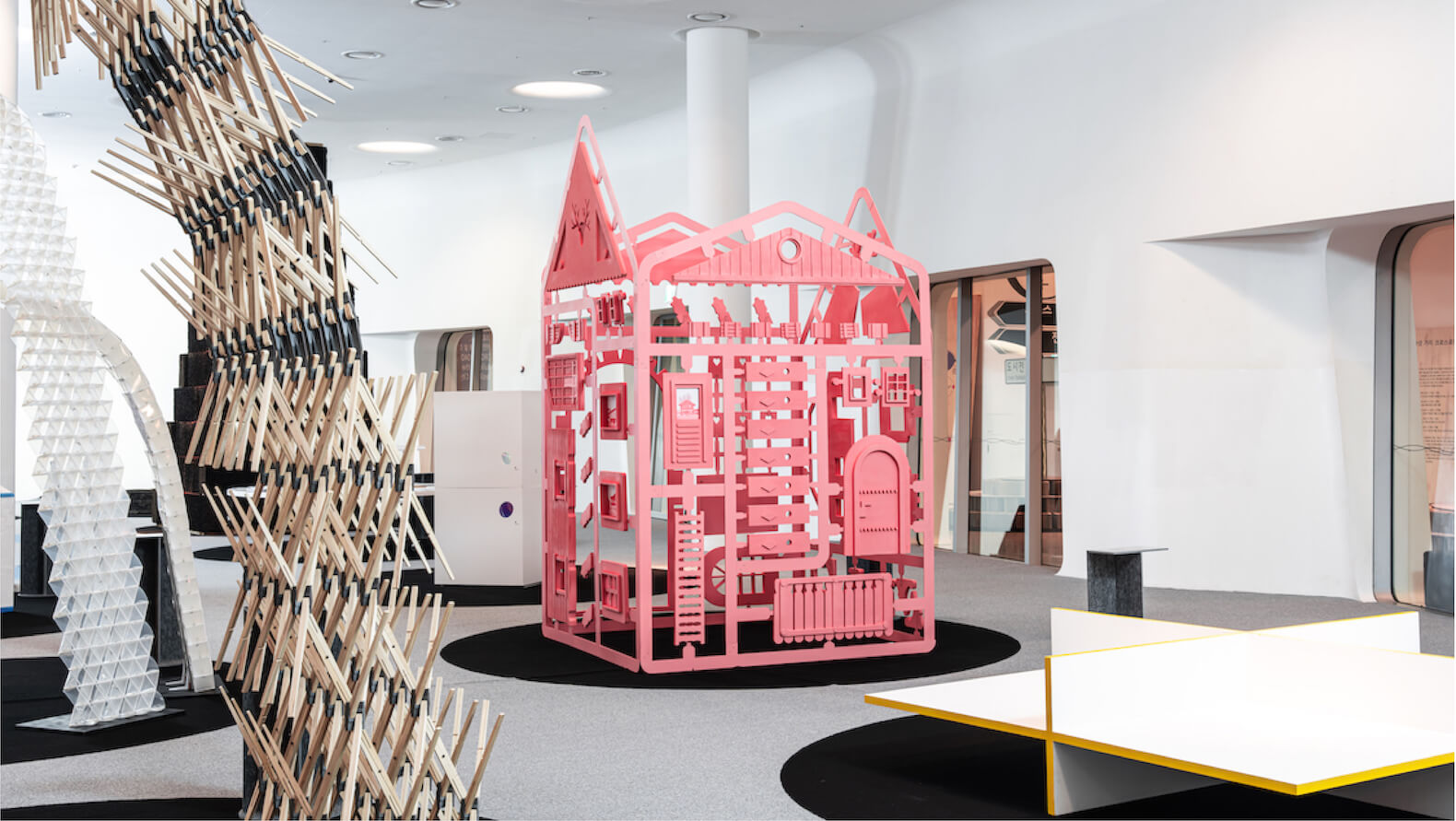 Fabricating Swissness is a multimedia installation designed by Architecture Office that explores the concept of Swissness.

The piece will be exhibited at the 2021 Seoul Biennale of Architecture and Urbanism from September 16 through October 31, 2021 at the Dongdaemun Plaza in Seoul, Korea, as part of the Thematic Exhibition, which explores the potential synergies between architecture and infrastructure.

The project, designed by Swiss-American firm Architecture Office, builds on the traveling exhibition Swissness Applied, presented in 2019 at the University of Wisconsin-Milwaukee, 2019 at Kunsthaus Glarus Güterschuppen, and 2020 at Yale Architecture Gallery; and on the forthcoming publication “Swissness Applied: Learning from New Glarus” (Park Books, Fall 2021).

Fabricating Swissness is a four-sided aluminium scaffold structure measuring 2m x 2m x 3.6m that illustrates the notion of “Swissness” and the Swiss chalet style in New Glarus, Wisconsin through vernacular imagery, audio, and memorabilia. In the early 1960s, New Glarus actively embraced the Swiss aesthetic as a way to enhance the social and economic base of its community. Today, New Glarus’ building code specifically contains Article II: Swiss Architectural Theme, which describes typical building elements that evoke certain associations with traditional Swiss architecture, such as the chalet.

Fabricating Swissness engages all the senses

Surrounding these are six photographs of New Glarus by Brian Griffin and audio interviews exploring the aesthetics of Swissness with Benedikt Wechsler of the Consul General of Switzerland and architect Will Gallaher. The interviews are mixed with alpine sounds derived from traditional Swiss folk music and reconstructed through a variety of digital transformations by sound designer Paul Chavez of Arup.

Together, the media, materials, and ephemera are semi-autonomous entities that together convey concepts commonly understood as Swiss.

“We are questioning if ‘Swiss’ architecture can be understood as just the formal character of specific alpine building elements as suggested in the design guidelines of New Glarus. Can material and size be disregarded? Can color be different? Seeing these ‘Swiss’ elements isolated from the actual architecture (i.e. shutters not on a facade) are they still understood as Swiss?” says McIntosh.

A transdisciplinary approach allows installations to create immersive experiences, be sure to check out Sanctum – Levi van Veluw’s immersive installation at the Het HEM museum.

The assembly of the installation draws inspiration from the overlapping and symmetrical joinery of Swiss Chalets. The structure is designed with a single joint that is made from screwing threaded barrels through two panels of 1/8” thick aluminum. Wiring paths are routed through two 1/8” thick panels that are sandwiched together and hide audio wires for speakers and mp3 players within the thin structure.

Made of individual elements to minimize material waste, the components of the structural assembly were cut from 5 sheets of 4’x8’ aluminum. The installation is conscious of its travel footprint, and can fit flatpack into a 4’x8’x30” plywood crate. Upon arrival in Seoul, it will be assembled by a small team of 3-4 people using only flathead screwdrivers.

“Americans have been trying to replicate alpine structures for a hundred years. Our interest was not to copy the chalet, but to actualize its image through minimal means. The process of optimization undertaken with ARUP meant less labor and material waste in the building process,” says Louie.

Architecture Office practices design through the application of examining images in consulting, design, and planning to build distinct identities and new environments. Architecture Lab is their research studio, where they examine the implications of images and image circulation on the built environment.

Architecture Office is led by principals Jonathan Louie and Nicole McIntosh, and is located in Texas. The Office is influenced by imagery that creates new contexts for architecture. It works on a variety of scales and types, from restaurants and shared workspaces to exhibition design and single-family residences.

Switzerland has been the playground for some of the world’s most provocative designers, check out Archi Icon – Le Corbusier.