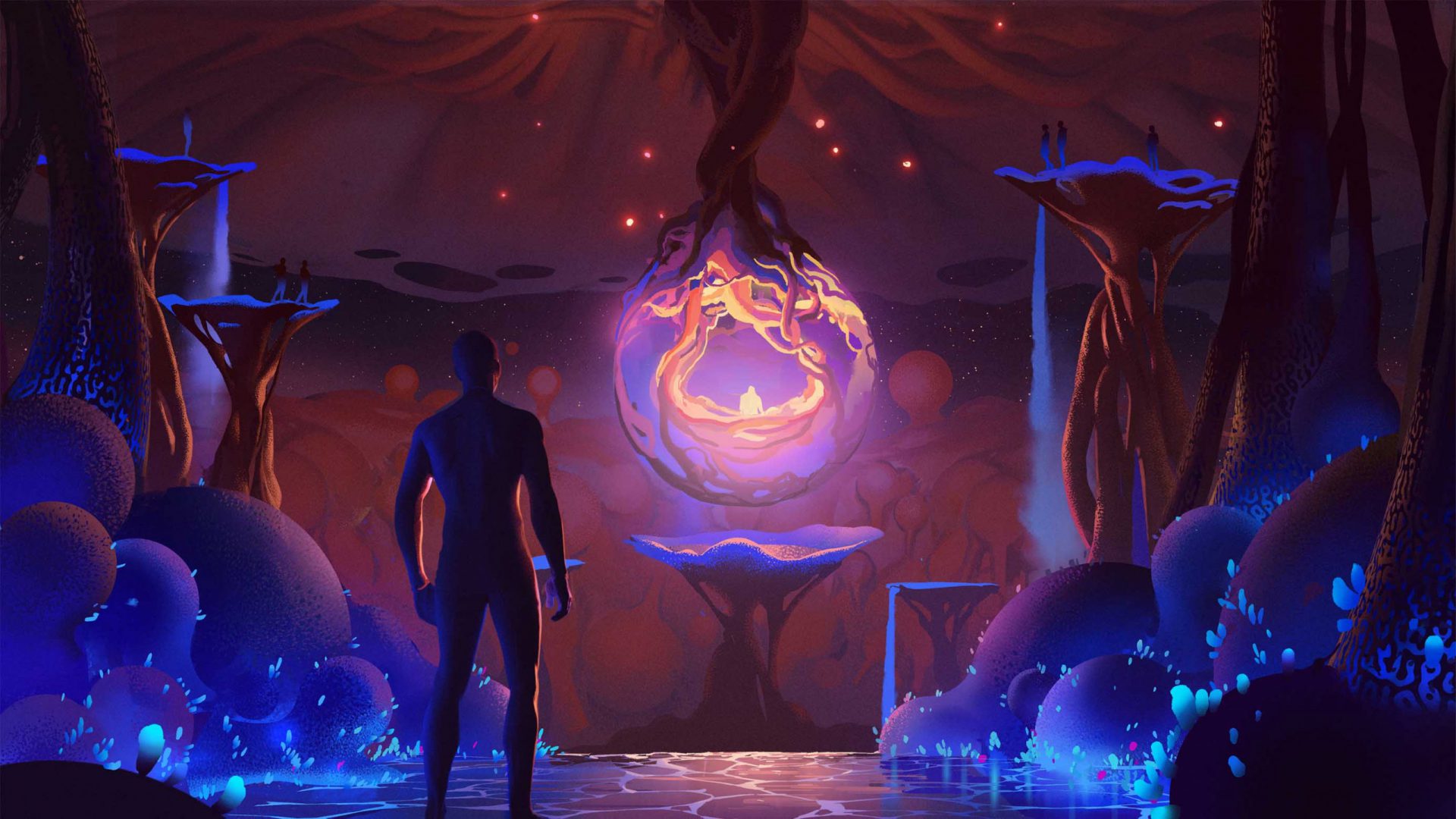 Remember that feeling you got when you left reality for a while to surround yourself with a crowd full of people connected to the same sound and dancing to the same beat? Sensorium Galaxy is transcending all social limits and adding a new dimension to the entertainment world by creating a universe of endless opportunities.

An immersive experience connected through various virtual worlds, each with its own concept, story, appearance and aesthetics style.

Sensorium Galaxy is a social platform based on VR (virtual reality) bringing people closer to each other and to the things they enjoy. A breakthrough in digital communication, Sensorium is creating a 3D virtual space where people can attend music shows featuring big names in electronic music, and even play immersive games in a safe, affordable, and global space.

DesignWanted had the opportunity to talk to Sensorium’s art director, Sasha Tityanko. She walked us through this futuristic universe they have built, from its story and aesthetics to the interactions and applications it offers.

The first world set to be launched is Prism, a world dedicated to electronic music.

Located in the crater of a crystallized canyon, Prism is an ever-evolving space with a futuristic venue that welcomes the biggest names in electronic music. The users will be immersed in a world filled with interactive objects and special effects.

“Just like earthquakes, we are going to have, what we call, ‘sound quakes’. At the culmination points of the show, and the most dramatic moment of the performance, the whole environment will change with the music,” says Sasha

The general aesthetics of the world also shift from minimal to brutalism. The stages and the themes change drastically taking one shape or another.

“The environment and the whole world transforms and comes into constant movements through the power of music and sound’, she explains.

The world is built around an Obelisk, a giant monument that breaks and reconstructs into different shapes. Among the multiple themes developed within Prism, an exciting one is names Tesla: it is formed when the Obelisk opens up to catch the energy from outer space, and brings it on to the artist, who can then transmit it to the audience on the dance floor. The same thing can go back from the audience to the artists, and back in space within Sensorium Galaxy.

“We think of music as a source of energy in Prism. It is all about the connection between the artist, the music and the user.”

Up until today, the artists who have been revealed to collaborate with Sensorium and perform in Prism are David Guetta, Carl Cox, Armin Van Buuren, Black Coffee, Dimitri Vegas & Like Mike, and more announcements are expected to be made.

“Right now, we will have a closed beta testing of Prism, in the middle of summer we will have an open version of it, and in fall we expect to have the first DJ show in Prism.”

A new dimension to self-reflection

The second world that will be released is Motion.

“It is a world dedicated to movement, and specifically to dance and artistic forms of movement. But also to self-exploration, it is a place where users can meditate and look inside themselves.”

At the opening of this world, the users will be able to stage their dance performances, take part in endless dance marathons, and watch performances and shows of artists from various music genres, such as special showcases, ballet, etc.

One of the main components that brings these worlds together is social interaction. Human users can communicate with AI-powered avatars with their own character, becoming virtual companions across the virtual journey.

“You can go to any Sensorium Galaxy world with your friends or by yourself”, explains Sasha, “you can choose to go there for the music experience or for the game-mechanic experience, but still get to connect and meet new people while there.”

The users have the liberty to travel through the different worlds by keeping the same avatar or by changing their appearance. At any time, from any place, friends or people who just want to communicate with each other can go to Sensorium Galaxy and enter the world they want.

Curious to know about other designers creating mesmerizing experiences? Head to The immersive soundscapes of Chris Cheung.

The first generation of Sensorium avatars is already available and provides a wide range of different looks and styles that the users can choose from.

“Your avatar can be human-like or alien-like. You can express yourself freely by choosing your character without depending on where you come from, what’s your income, and what you do in real life. You can create an ideal version of yourself.”

Sensorium is collaborating with Australian-based acclaimed 3D designer Jason Ebeyer to design new avatars, who takes inspiration from different subcultures, social media trends, and fashion styles such as cyberpunk and futuristic fashion, to create special kinds of real characters. Defined as ‘the dreams of the new generation’, the new avatars will be revealed upon the launch of Prism world.

How do I get started?

The first step is to select an avatar to explore PRISM – the first world to be launched on Sensorium Galaxy.

The general admission to Sensorium Galaxy is free, allowing users to move freely in the digital space and listen to virtual DJs, a range of AI-driven avatars who perform AI-generated music inside the digital world.

“Whether the users get into Sensorium Galaxy for free and watch the basic show with a virtual DJ, or whether they decide to get into the big-name artists’ show, they just need to buy the digital entry ticket, step into the virtual world, enjoy the show and do all the activities at any possible time.”

All the locations are open 24/7. “Typical virtual performances go away a day or a week after the live event”, explains Sasha. “Whereas, shows created within Sensorium Galaxy go into the library of the event and stay there for over a year.”

In terms of physicality, you can enjoy this experience from any place, using your VR headset and controllers. You will be moving around the beat and dancing, but it’s all happening within the typical VR area.

“Within the Motion world, the user will also be able to swim and dive in some locations. It all happens very smoothly, the user doesn’t really need to move much.”

A mobile application version of the galaxy will be available and dedicated to social communication with the different avatars, real users and virtual companions. Sasha also tells us that Sensorium is releasing a desktop version together with the VR version this summer, and later on, they are also planning to launch on existing game consoles.

A peek behind the scenes

As the art director of Sensorium, Sasha works on establishing collaborations and partnerships with representatives of the entertainment world. But also with artists with whom they design the avatars, the virtual world and their concepts.

“We work with the artists to create the concepts underlying each location – What is this world going to be about? What look and feel will it contain? Which artists will work with us on the creation of this world? Which avatars we’re going to have in Sensorium Galaxy? What is the inspiration behind them?”

One of the collaborations they have established is with High Scream, a London-based creative and production studio, with whom they have developed the concept and the design of the stage, show, lights, and the virtual venue itself. High Scream has experience working with electronic music, but also working on different events, from opening and closing the Olympic Games, to MTV awards and artists world tours.

A new shape to the entertainment world

Sensorium doesn’t aim at making a substitute for real-life entertainment, but rather at giving it a new dimension. They want to create dedicated shows that cannot happen in the physical world. When it comes to the artists, Sensorium is offering a new playground for them to reach their audience.

“This experience just can’t be built in real life. 2D versions can have virtual stages, but they do not provide any kind of interaction. It is basically like YouTube, where you can watch your beautiful scenery, but you cannot get inside.”

The physical world is limited by territorial and financial boundaries that don’t allow you to travel, go to events or festivals as much as you want to. And on top of that, modern users are suffocated by social media that is giving them a fear of missing out.

“For example, some people who are true fans of artists, sometimes never have the opportunity to go to an event because they have a disability,” explains Sasha.

She tells us that Sensorium doesn’t plan on limiting itself to music and that it can extend towards different activities.

“We are just at the beginning of this and we think that in the future, it will all depend on each individual’s interest, some would prefer to spend time watching music shows or having a kind of virtual nightlife entertainment, and others will prefer to dive into a world of mindfulness, or express their artistic power.”