Dwelling on the Martian cliffs in Nüwa city 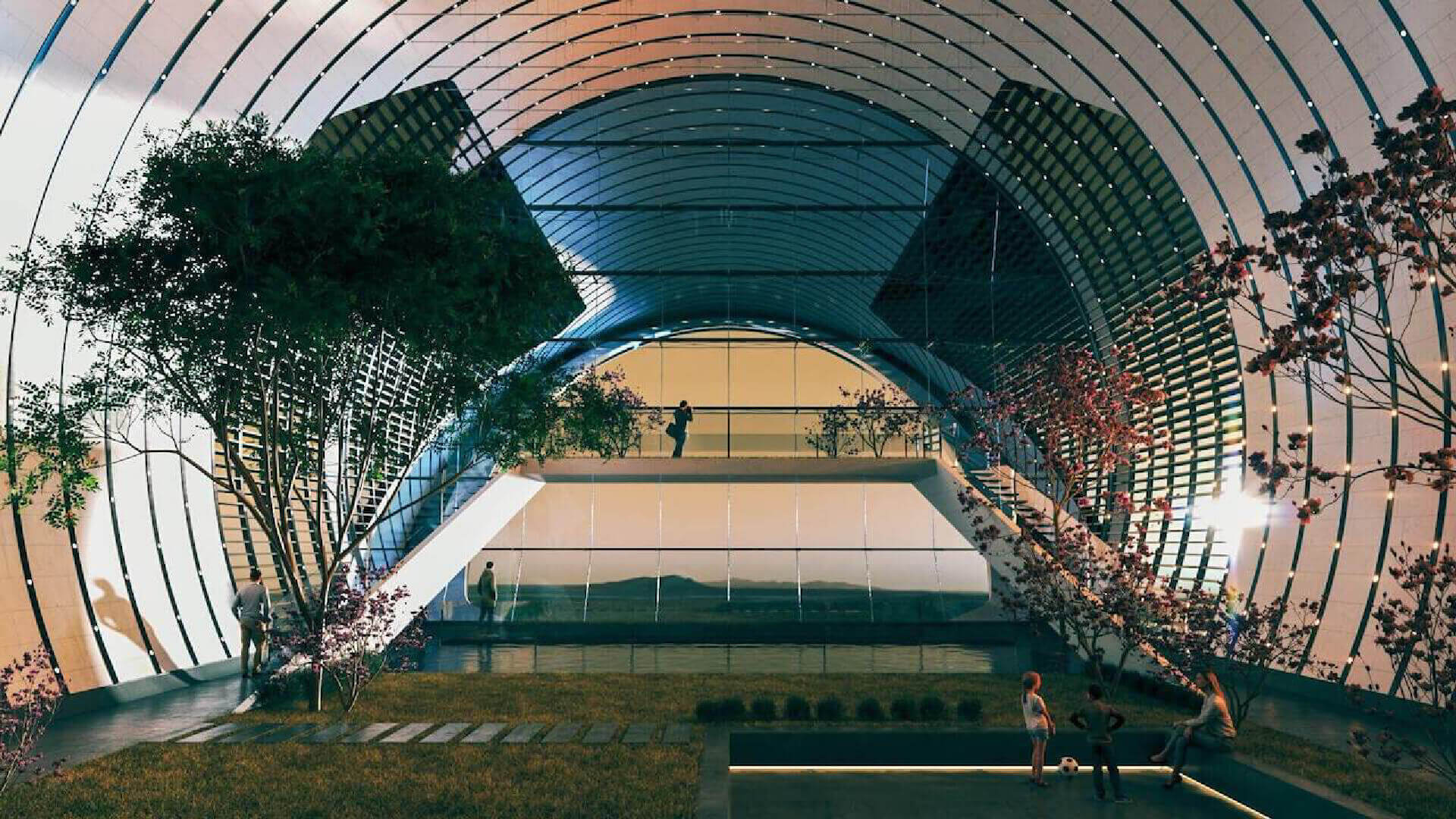 ABIBOO and SONet design Nüwa, a self-sustaining colony of tunnels to house one million people on the Red Planet.

Mars as a site for a human colony has long captured the popular imagination. Committed to this vision, The Mars Society sought settlement proposals via its Mars City State Design Competition announced in February 2020. In response, Nüwa envisages enticing citizens from Earth with a modular vertical colony built into the rocky Martian cliffs and expanding into the valleys below.

Why Nüwa? To build a city of one million inhabitants located on Mars, as self-sufficient as possible

Projects were assessed based on four keys areas: technical design of the engineering elements, how the city can be economically successful, the social, cultural, and political dimensions of the city, and aesthetic design.

The minds behind Nüwa – ABIBOO and SONet

The Nüwa city proposal is a collaborative effort between the architectural and design firm ABIBOO, and SONet, The Sustainable Offworld Network.

Alfredo Muñoz founded ABIBOO in 2010, and is also co-founder and board member of SONet. With offices in Spain, the USA, and India, ABIBOO refers to its structure as a ‘decentralized-creative-brain’ and considers this integral to the studio’s innovation-driven approach.

SONet is focused on developing fully sustainable space infrastructure and taps into the expertise of scientists in areas including systems engineering, mining, astrobiology, and architectural design. Board members are based at several European Universities and Institutes.

Alfredo Muñoz was recognized in 2019 as a European Young Leader (EYL40). Before starting ABIBOO he gained experience in senior roles at renowned firms including Toyo Ito and Skidmore-Owings-Merrill. ABIBOO has designed numerous multi-residential developments, as well as luxury housing and proposals for cultural institutions.

Can you imagine your future house to be 3D printed on Mars? Discover Marsha by SpaceFactory.

Rather than design a single city, the team proposed a series of five settlements, each with a capacity of 200,000 – 250,000 inhabitants. Nüwa city is the capital and located at Tempe Mensa. Further cities are positioned for access to mineral deposits and ice at the north pole.

The atmospheric challenges of Mars led ABIBOO to devise modular vertical developments which are excavated into the Martian cliffs. High levels of solar and gamma radiation called for structures which are protected from direct sun. Alfredo notes that the low atmospheric pressure means that conventional Earth architecture would explode from the pressure inside.

A series of ‘macro-buildings’ are placed in tubular excavations that are 10 meters in diameter, 60 meters long and contain two floors. The design has three residential and three work modules and created with a view to being flexible and scalable. High-speed elevators connect everything from the top Mesa to the valley below. Electric vehicles within pressurized spaces would be used for travel within and between cities.

Beyond the physical accommodation of inhabitants, all the basic organic life support systems are required. That includes the 820 tons of oxygen, 10,000 tons of water and 1,500 tons of food consumed per day by one million people. The top plain accommodates crops, manufacturing and energy production. The valley houses schools, hospitals, cultural and social spaces.

Hydroponic crops, microalgae farming, and bacteria growth for waste processing is all automated and takes place within CO2-enriched air conditions. AI technology would be employed to control the air quality in the habitable areas and the adjacent sections on the valley floor for farm animals and insects. It is expected that only a very low meat diet would be sustainable, due to the high energy requirements of meat production.

Style & Aesthetics – Domes and a sparkling array of cliff lights

Enclosed living spaces which require their own atmosphere completely sealed from the surrounding environment always have an air of fantasy about them. This is also true of Nüwa. Trees grow indoors under indirect sunlight and domes containing urban gardens and vast parks with bodies of water are artificially created.

These devices recur in proposals for space settlements as they directly address the practical conditions of a hostile surrounding landscape. They also support human well-being and provide an ‘emotional linkage with Earth’.

Nüwa stands out for its distinctive use of small tubular excavated buildings. The resulting array of bubbles and circular projections from the cliff faces create a unique aesthetic and contrast to other projects as well as the structures in the valley and on ridge tops. Lit in the dark they mark the unmistakable presence of life.

Mars is the best option for a human colony

Mars is a cold, dusty desert planet, yet the one in our solar system most like Earth. According to The Mars Society, it is the best candidate to expand the presence of human civilization beyond Earth. Mars has an atmosphere, extinct volcanoes, seasons and is plentiful in many resources, including easily accessible forms of carbon, nitrogen, hydrogen, and oxygen. Its rusty-red color comes from the oxidizing of iron minerals in the soil and atmosphere.

It was a requirement that only the minimum components, like advanced electronics, be imported from Earth to kick start the settlement before it becomes fully self-supporting. The scientists of SONet and architects and designers at ABIBOO looked in detail at how to obtain and manufacture all the materials required for the cities directly from on Mars. Citizens would also be shareholders in the city and required to actively contribute to the community.

It is the hope of SONet and The Mars Society that lessons learned from pursuing a Martian colony can also be applied to our sustainability challenges here on Earth right now.

Projects like Nüwa serve to highlight the reality of what it takes to support human life, and how much we rely on the ecosystems of Earth for our survival. Only by addressing technical, environmental, economic and community aspects in unison could a Martian colony hope to be successful.

ABIBOO and SONet’s Nüwa proposal was selected as one of the ten competition finalists. The top 20 proposals will be published in a book titled “Mars City States: New Societies for a New World” to be released in 2021.

Life beyond the boundaries of Earth is a scenario in which many architects are working on, like SAGA and their settlements.