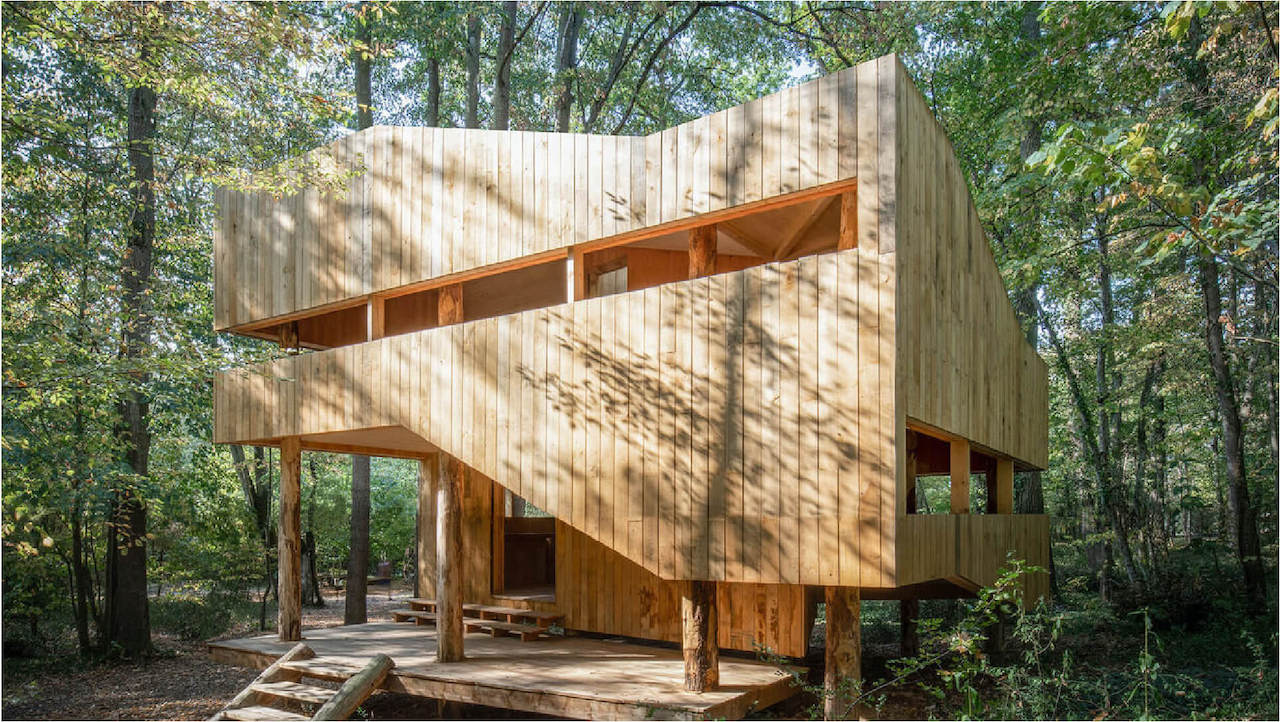 A prefab cabin made from locally-sourced timber challenges the capabilities of wood as part of an experimental project that questions the flexibility of the material.

In the grounds of a 15th Century French Castle, a striking dwelling made entirely of wood takes inspiration from the local vernacular. The pavilion is part of an educational exhibition organized in the park of the Château de la Bourdaisière located in Montlouis-sur-Loire.

Why the 100% Wooden House? To re-think the spatial experience of timber habitats and challenge the flexibility of wood

The 100% Wooden House project is the result of a competition launched by Bourdaisière Castle in the Loire region of France. The requirements were to design a two-storey house no bigger than 55sqm using only wood.

The minds behind Grapes & Dates – LOCAL and Suphasidh Studio

The project brings together a trio of architects: Matthieu Boustany and Benoist Desfonds of European practice LOCAL and Peeraya Suphasidh of the Massachusetts-based SUPHASIDH.

LOCAL is an architecture and urbanism studio with offices in Bergen and Paris inspired by the transformation of lifestyle through architecture and design. Founded by Peeraya Suphasidh in 2017, her namesake studio focuses on the sensitivity and specificity of built environments. Together, the architects have worked on other notable projects including Grey Matter, an intergenerational urban development focused on supporting an ageing population.

Curious to know more about the use of wood in cabin designs? Don’t miss HANNAH clads Ashen Cabin with infested wood, in New York

The 100% Wooden House features a solid volume made from thick, weather-resistant wood and suspended on piles made from acacia wood – chosen for its water-repellent qualities. Building a house made from this particular wood also gave LOCAL and SUPHASIDH a chance to work with an extremely short supply chain. Identifying an opportunity to use chestnut trees that were felled at Château de la Bourdaisière, the architects gave life to materials that had been sitting in storage for several years.

A local sawmill processed the wood with CNC machines before embedding them within the piles that elevate the entire structure. The pillars that support the house were also sourced from the grounds replanted in the earth to stabilize the structure while mirroring the surrounding environment.

The wooden structure has a distinct shape thanks to its almost geometric facade. Rather than adding lots of small windows, elongated apertures wrap the exterior opening up the interior as though slices have been cut into the monolithic volume.

The interior programs wrap around a bathroom that makes up the central core – and the only enclosed space. Surrounding this is one spacious and continuous volume with a series of stairs and a slop that leads to an open-sky courtyard. Inside, the various areas are identifiable by slight volumetric adjustments.

For example, the bedroom, which is raised slightly to guarantee a level of privacy. Meanwhile, large apertures in the facade flood the space with light, creating a constant connection with the forest environment.

After winning the castle’s 2017 design competition, LOCAL and SUPHASIDH experienced several delays due to permitting and budgeting. In the end, they only began construction in the fall of 2019.

Luckily, their use of 3D modelling, prefabrication, and cross-laminated timber helped shorten the construction timeline and they were able to build the structure in just one-and-a-half months.

The writer’s opinion – The ‘modern cabin’ does it again

For a few years now, architecture has seen a growing trend when it comes to cabins with sleek, open designs. In place of quaint dwellings are sharp structures where modern conveniences trump rustic charm, and traditional materials are no more.

That’s why the 100% Wooden House stands out because the project was driven by an objective to both challenge and champion wood. It feels inspired by traditional archetypes while evoking contemporary principles – and I love that.