Made with the most sophisticated technique, for a charity event 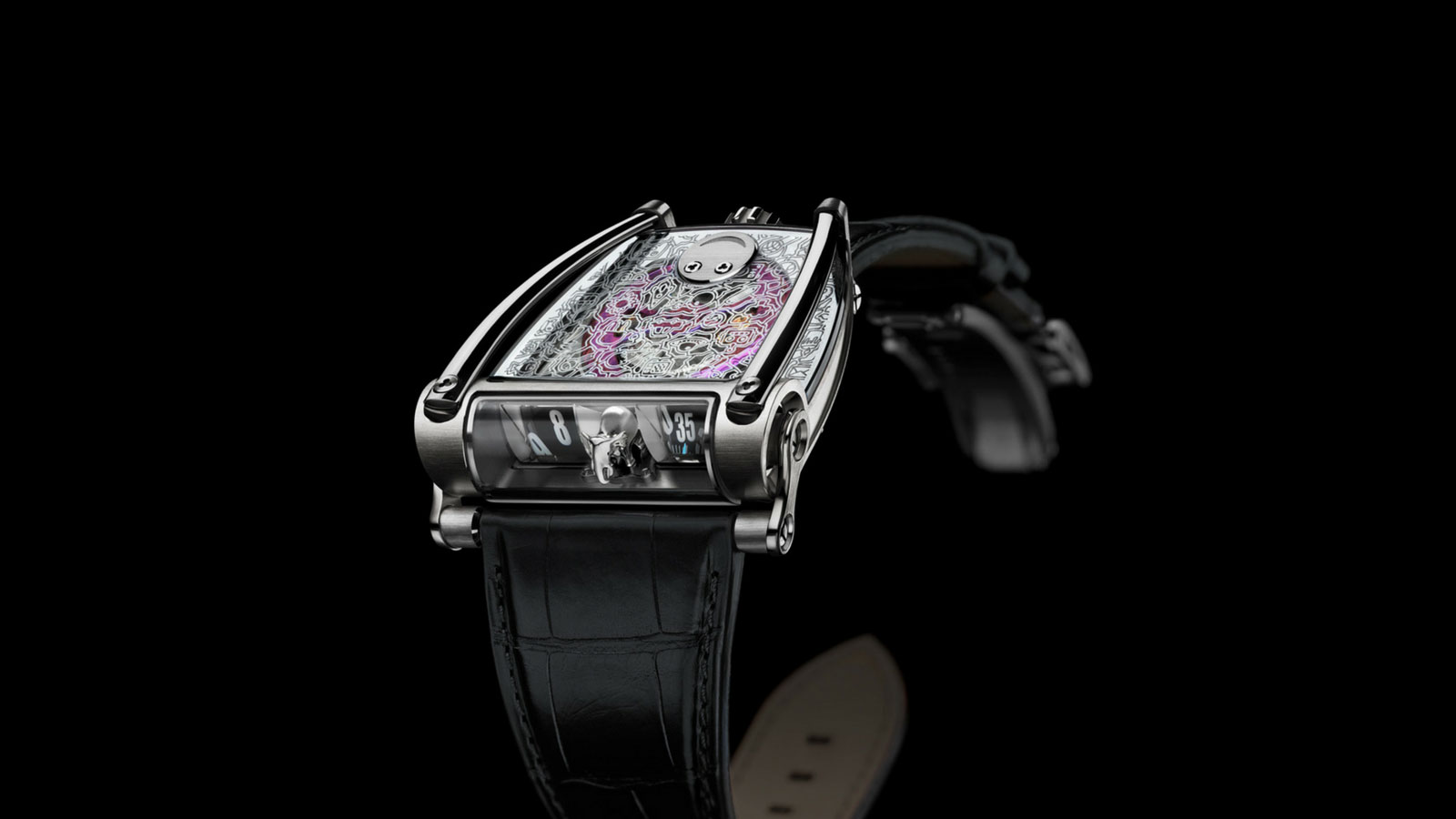 MB&F’s hymn to childhood creativity concretises a partnership with the world’s most high-profile charity event, the Biennal Only Watch Auction.

The focus is on Duchenne muscular dystrophy, a genetic disorder characterised by progressive muscle degeneration, which primarily affects young boys.

Maximilian Büsser and friends contribute to the 2017 edition with the stunning Horological machine HM8, with the input of 15-year-old Cassandra Legendre.

Her extravagant, doodle-like drawing is engraved and metallised on the sapphire crystal pane surmounting the HM8 engine. The idea behind including the innocent creativity of this talented youngster is to have a child create something in aid of other less fortunate children who are denied of many opportunities childhood should offer.

Cassandra’s work is the result of a child’s genuine innocence, which tends to fade as we grow up. If you look closely at the apparently abstract drawing, you will notice figures and objects from the imagination of a child: ice-cream, animals, a football, toy car, jet plane, robot, and so on.

The lines of the drawing represent unity and connectivity.

The elements evoke stories which have always inspired MB&F creations, the leitmotif of their entire revolutionary project, and their sophisticated, yet simple approach to watchmaking. Particular attention has been paid to one aspect of the HM8 only watch: the elephant.

Positioned close to the minute disc and reproduced in three dimensions between the optical prisms, it is set on a tiny white-gold plinth.

This micro-sculpture has been hand-crafted by artist, Oliver Kuhn, and was chosen based on the popular use of the elephant in children’s books; anywhere from Kipling to Disney.

What’s more, as an endangered animal under siege, it is symbolic of those suffering from serious health conditions, such as Duchenne muscular dystrophy. Just like any other creation from the visionary team, HM8 is made with the most sophisticated technique and precision, using the finest elements.

The elephant is in white gold, and took 120 hours to complete.

A tucked-in trunk and pulled-back ears give him a peaceful pose.

Another important symbol is the happy face etched on a white-gold disc, two holding screws forming the eyes.

This replaces the usual HM&F logo, adding a childlike perspective.

The overall design of HM8 has been inspired by Büsser’s childhood dream to become a car designer.

Although he switched to watches, his childlike imagination has always had a strong impact on outstanding creations such as his HM8 design, which could easily be scaled to the size of a car; breaking all the restrictive rules of ordinary watch making. As would be expected, the Horological Machine 8 boasts the most sophisticated of materials, including sapphire crystal for the case, and roll bars in grade 5 titanium, making it lightweight, yet fiercely strong and resistant to corrosion.

Sapphire crystal is much more difficult to work to optical precision than glass, and it took considerable development and meticulous care to create crystals that reflect and magnify light without the slightest distortion.

The vertical, forward-facing display makes the HM8 Can-Am an excellent driver’s watch, as there is no need to lift your wrist from the steering wheel to read the display.

All in all, another superb revolutionary piece of art work by MB&F.

This one, in addition, supports a major children’s charity, providing further confirmation of their cohesion with values and philosophy, as well as their greatness.