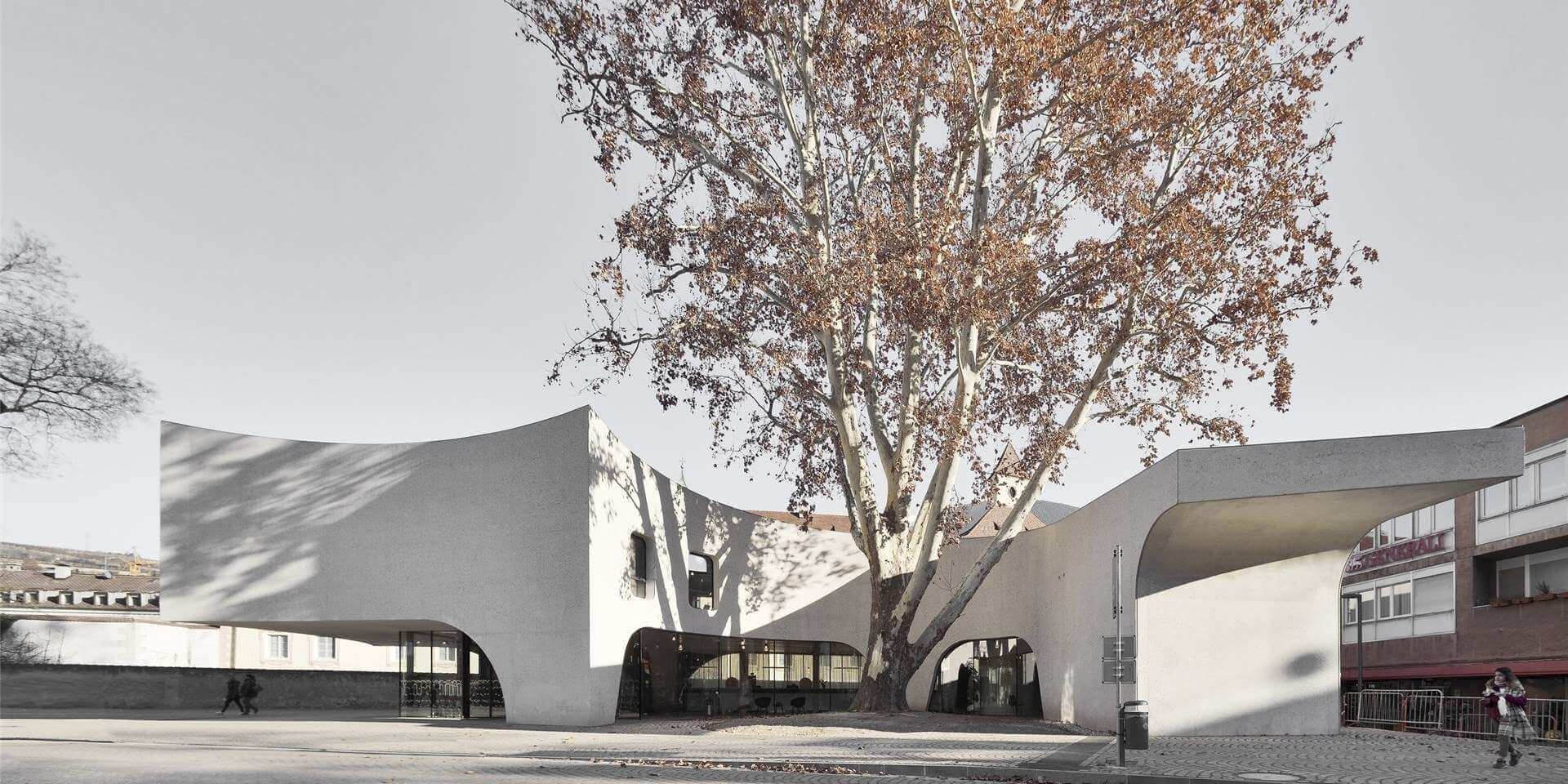 TreeHugger is a sculptural concrete structure wrapping itself around an existing Platanus tree.

TreeHugger is a tourist office in the Northern Italian town of Bressanone, designed by MoDus Architects. The concrete structure is a contemporary construction that wraps around the trunk of a large Platanus tree, a design characteristic from which it takes its name.

Why TreeHugger? To embrace its surroundings.

The location of TreeHugger is a ground of ‘architectural homicides’ that took place between the 1800s and the 1970s. Even though the architects talk tongue-in-cheek about these ‘victims’, this project has been designed to wipe the slate clean and trump what came before it – for the sake of sustainability at least.

The minds behind TreeHugger – MoDus Architects

Based in South Tyrol, MoDus Architects was founded by Matteo Scagnol and Sandy Attia. The architects combine their cultural and formative backgrounds to create award-winning architectural designs that range from public buildings and private commissions to institutional buildings.

The work by MoDus Architects has been featured in four editions of the Venice Architecture Biennale. They have also received numerous awards including the special jury prize in the 2013 edition of the Italian Architect of the Year award.

The name TreeHugger alludes to the way in which the building snakes around the tree rooted in the centre of the plot. The whole building structure celebrates the connection between the natural and built form which is evident in the texture of the building envelope. The exterior concrete surface is bush-hammered with a rough-hewn finish that mimics the coarse texture of the tree bark.

The concrete upper floor has a large overhang that cantilevers out to provide a large sheltered area surrounding the ground floor. The seamless concrete skin of TreeHugger was created by casting the whole concrete structure in one flow and in successive sections to form a continuous 9-meter tall form.

The tree in the middle of the plot serves as a centerpiece surrounded by five concrete arches that penetrate down into the ground, effectively achieving a sense of lightness and raising the volume of the building.

The arches frame the trunk of the tree and resemble roots shooting down into the ground while the tree shoots branches in the opposite direction, resulting in a strong bond between the building and environment.

The ground floor level of TreeHugger is nearly fully glazed, there’s almost a feeling that the concrete first floor has landed on top of a glass box. The glass facade allows maximum transparency and permeability to the public spaces and information booths that are housed within this level.

Bressanone serves as an ideal location for tourists destined for the Dolomites as it’s situated between Lake Garda, the Cortina d’Ampezzo mountain range and Innsbruck.

This has seen many tourist information buildings constructed and demolished on this particular site, including the tourist pavilion by the late local architect Othmar Barth – and before that a modernist structure.

Design memento – A façade for Bressanone

The surrounding architecture is echoed in the TreeHugger. Visual connections are reflected from the ancillary Chinese and Japanese pavilions that mark the Bishop’s Palace Gardens, that are adjacent to the new tourist information office.

The curved glass and concrete walls are synonymous with the exotic curves of the corner pavilions, thus transforming the structure as a new landmark for Bressanone.

What struck me the most about this project was how the architects responded so sympathetically to the local architecture and the natural environment. TreeHugger responds by literally hugging nature while creating the impression of new life being born from a renowned architectural graveyard.

The curves in the building envelope not only wrap around the Platanus tree, but adjoining walls also snake around to replicate the curves of the existing buildings surrounding this site. This shows a deeply rooted understanding of the locale that has been elegantly integrated into the design.