Visionnaire blurs the lines between art and design 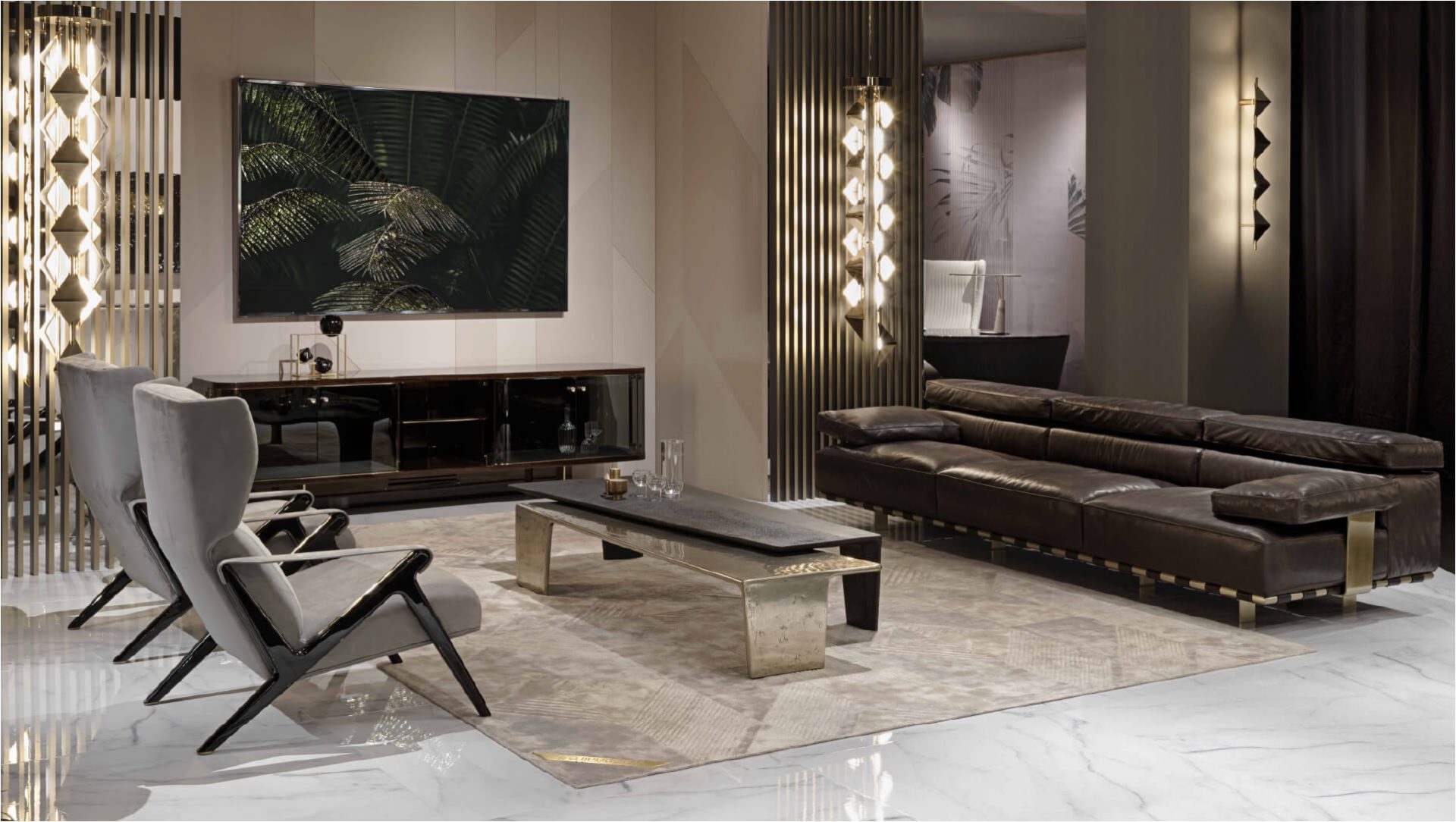 “Form follows function” goes the old saying, a design directive prioritising an object’s use before any unnecessary decoration. And yet, for well over a century, artists and furniture designers have turned this maxim on its head, blurring the lines between art and design.

Some of the greatest modernists such as Frank Lloyd Wright, Charles and Ray Eames, Isamu Noguchi, and Frank Gehry, gave new meaning to the idea of form and function, elevating industrial design to an art form by creating pieces of sculpture that play on the idea of furniture.

“Meta-luxury” brand Visionnaire has taken up this same charge. “The concept of art design is precisely this synergy,” says the Italian brand’s Art Director, Eleonore Cavalli. “It’s the meeting point between the art of making and the art of imagining.”

The company, formerly known as IPE, was founded by the Cavalli brothers in 1959 and made a name for itself thanks to its use of groundbreaking technology for moulding polyurethane, a new-generation plastic.

Today, however, Visionnaire is better known for its combination of concept and craftsmanship, which it champions to create pieces that enter the realm of collectible art design and celebrate the maison’s all-Italian origins.

Meanwhile, the “meta-luxury” design language is reflected in the materials it uses to create its pieces, which are sustainable and responsibly sourced.

“The entire Visionnaire collection consists of artifacts, made by artisans with specific skills that have been handed down for generations,” says Cavalli.

Each one of these artifacts is handmade and features beautiful materials such as precious metals, fossil wood, crystals and natural stone. This also includes leather that would otherwise be discarded as a by-product, and recyclable textiles comprising polyester threads made from recycled plastic bottles.

In September, During Milan Design Week, the brand will release a new sample book entitled ‘Re-generation’, which details the origins and the processes behind every single one of its fabrics.

“What changes is the design, always attentive to the search for emotional forms,” says Cavalli. “[We are] always in search of desirable and seductive, sublime forms – like a sculpture, a painting, an installation or a performance.”

The Visionnaire brand was born in 2004 and presented for the first time at the “Abitare il Tempo” fair in Verona. Since then, an evolution has seen the passage of collections year after year, but what has not changed is its consolidation of craftsmanship and creativity.

“Our brand has entered ever more decisively in the experimentation of the relationship between art and design and in the conception of ‘objects of desire’,” says Cavalli. “It’s a business model that has evolved to become part of the area of ​​collecting one-of-a-kind or very limited edition pieces.”

The convergence of art and design is so important for Visionnaire that the brand even has its own art collection to complement its furniture, carpets and lighting. The collection can be experienced at its showroom in Milan’s Piazza Cavour, a former cinema which the brand renovated as its flagship in 2008.

“The Wunderkammer is a real art gallery, for the presentation of curatorial art exhibitions,” explains Cavalli. “[It was] born as a room of wonders and a space for experimentation to fascinate and amaze guests. In this context, opportunities to learn and expand our knowledge can arise.”

It’s an approach that is not entirely new for the company. Visionnaire’s first art design project actually dates back to 1961 when IPE participated in the first edition of the Salone Internazionale del Mobile in Milan. Visonnaire’s parent company exhibited the Mercury armchair and sofa designed by sculptor Rito Valla, which impressed with their distinctly bold forms topping an exceptional metal swivel base with tapered walnut legs and brass supports.

Proud of this mid-century modern piece of the brand’s history, earlier this year Visionnaire unveiled a limited-edition re-release in collaboration with online marketplace 1stdibs. “Thinking about it today, [Mercury] was almost a visionary declaration of what the future of the company would be,” says Cavalli.

Faithful to the original design, the seat and sofa still amaze for the high engineering hidden behind the soft, sinuous and artistic shapes that define its upholstery. Of course, Mercury is just one in an entire collection that plays around with materials and silhouettes to create unique objects that blur the lines between form and function, and art and design…

In celebration of Rito Valla’s iconic exhibit during Milan’s Salone Internazionale del Mobile in 1961, the Mercury sofa and armchair are back. The original Mercury established the company as an experimental force. It was the first to interpret a revolutionary system involving the use of polyethers moulded around lightweight metal reticular structures as a substitute for kapok, horsehair, springs, elastic cords and nails in the manufacture of padded furniture.

Designed by Los Angeles-based artist Marc Ange, the Pavone collection comprises a fleet of peacocks that toe the line between sculpture and functional design. The capsule was inspired by the artist’s travels to India, where multiple encounters with the animal prompted a fascination with its form. It’s crafted with 1970’s vintage-inspired camel leather, vibrant blue and green custom Visionnaire fabrics, and brass coated in regal bronze plating.

Cosmic inspiration guided Draga & Aurel’s capsule collection for Visionnaire, which uses materials reminiscent of the moon’s surface. To mark fifty-one years since man landed on the moon, the duo created four pieces: a console table, a low table, a dining table and a family of lamps.

The Amos dining, named after one of NASA’s space satellites, features a dark, concrete base treated to mimic the natural effect of erosion. This cylindrical base is embraced by two metal cuffs that were cast in moulds before adding sand to create a texture reminiscent of the surface of the moon. The table is topped by a circular, six millimetre-thick piece of hand-cut glass.

The Lego console table is made from the same, contrasting materials, which interlock to create a single unit consisting of one leg and a tabletop. These two pieces, one metal and the other concrete, are then slotted together like Lego bricks to create one complete and functional console table. Similar construction applies to the low table, which functions as a coffee same applies to the low table

The metal is worked by sand casting. A “main model” is used to make a sand mold that will be filled with molten metal.‎ The fine sand allows you to give a three-dimensional texture to the metal, which is subsequently polished by hand.‎‎ The material nature of concrete is made even more evident by means of an erosive treatment of black lacquering.‎

Informed by retro-futurism, the Sputnik wall and pendant lamps are modular lighting solutions inspired by the Space Age. The series is named after the world’s first artificial satellite and features LED strips embedded within brass tubes. Attached to these tubes are rhombus-shaped sheets, which are folded above each strip to reflect the light emanating from behind.

The products mentioned in this article are on display as part of Visionnaire’s entire collection, which can be found on display in the brand’s Milan, Miami and Los Angeles flagship stores. They can also be discovered at the Visionnaire’s Hong Kong Embassy.

This September, Visionnaire will also celebrate the opening of new stores in London and Dubai. For more information about the collection and a view behind the scenes, visit Visionnaire’s website. 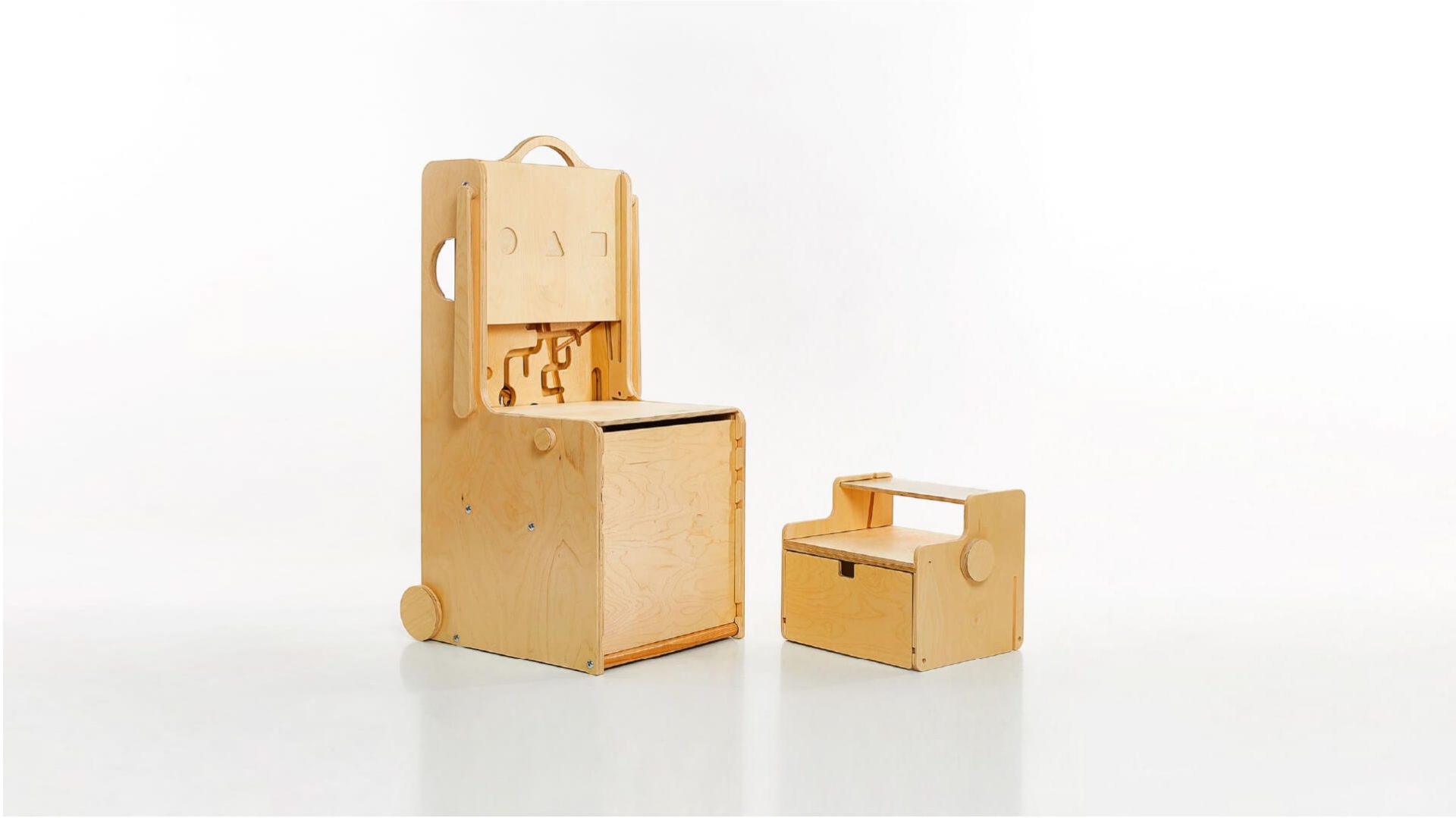 Inside the Leoleo chair is an entire children’s play area

Created by father Dan Popa, Leoleo is a slide, a ramp, a rocking chair, an activity desk, a high chair with a feeding table and so […] 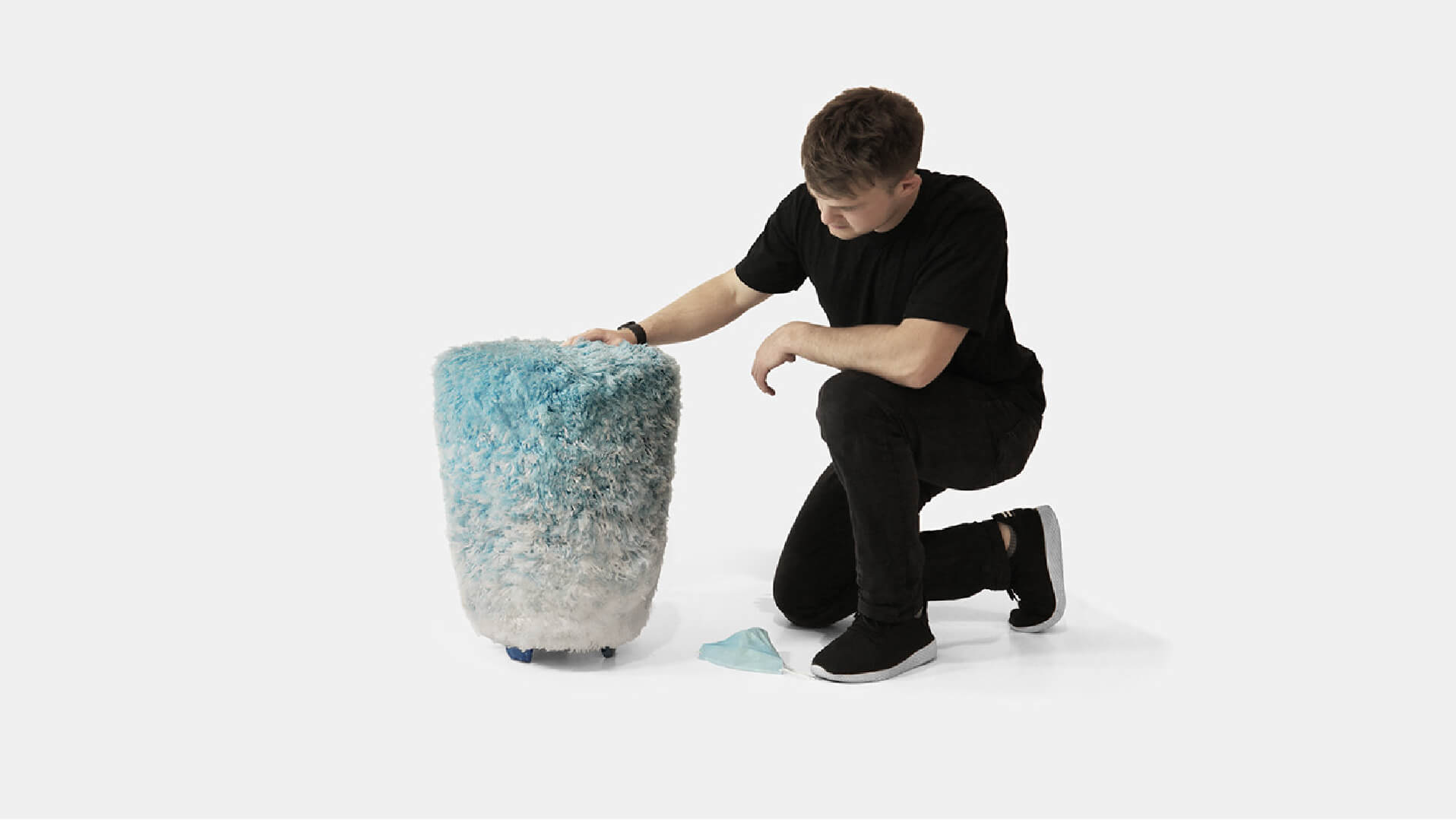 The Veil stool is made from 4000 disposable face masks

British designer Joe Slatter created the white and blue stool using discarded face masks found on the streets of London, which he spun into soft yarn. […] 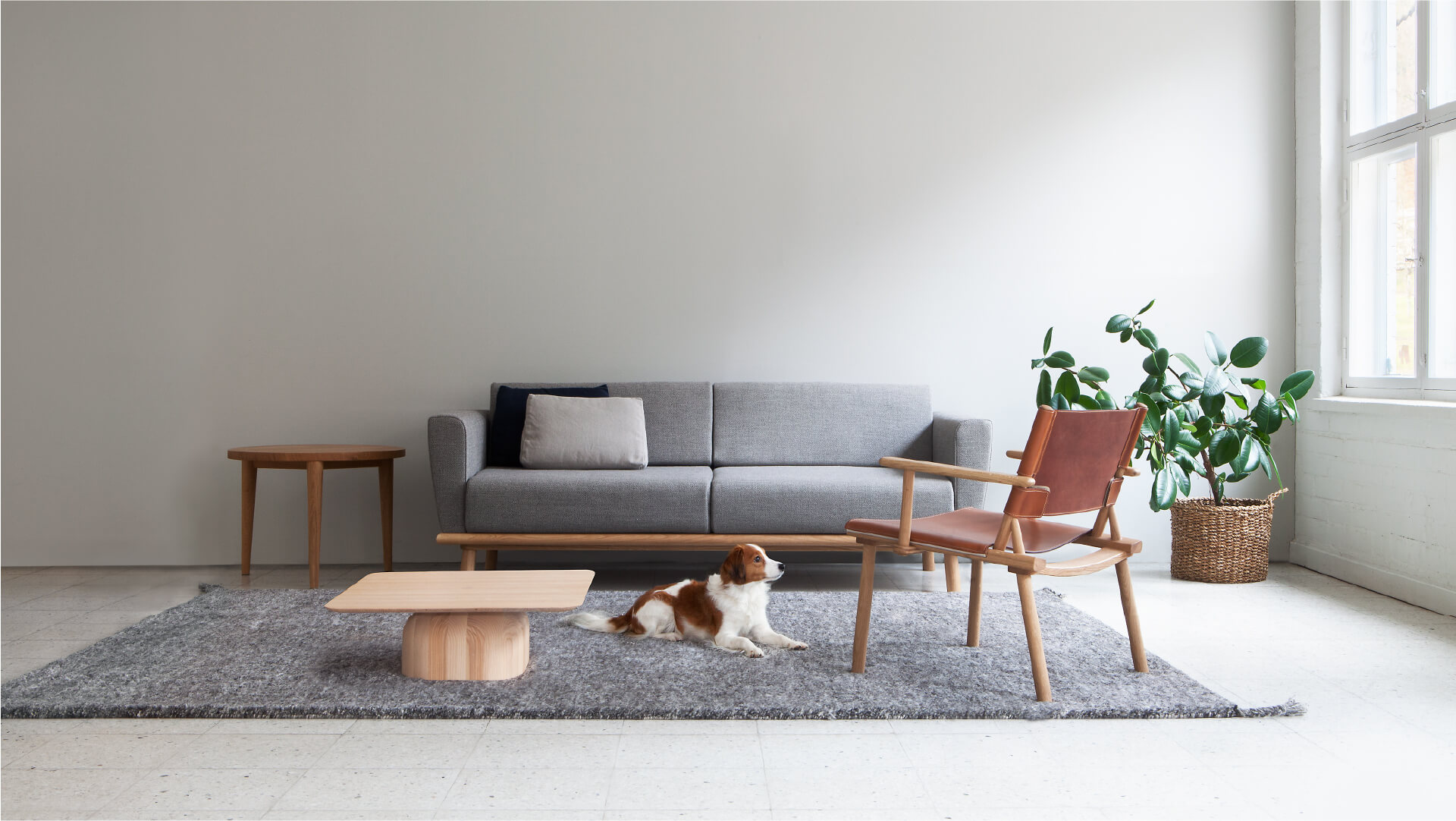 Nikari finds the true balance between nature and design