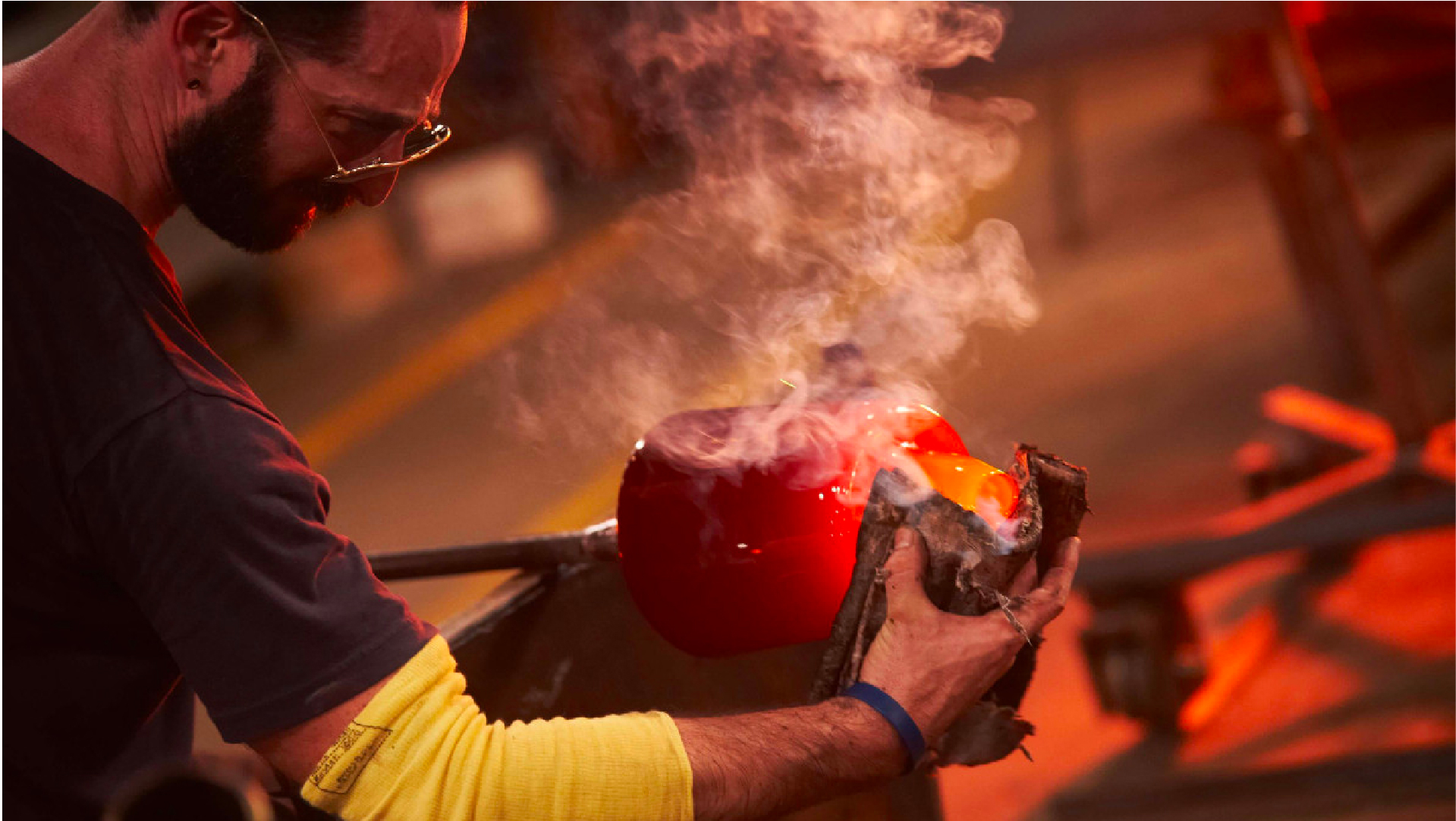 Blown Away, the TV competition about glass where ten artists run for a money prize and a residency at the most important glass museum in the world.

Available on Netflix the “Blown Away” series is composed of ten thirty-minute episodes where ten glassblowers, come together in North America’s largest glass studio or “hot shop” as they call it and compete, creating glass masterpieces.

The show’s moderator, Nick Uhas is a former Big Brother U.S contestant and science YouTuber, while Katherine Gray, an artist and professor at California State University, is the chief judge.

Each of the ten episodes, Blown Away portrays the artists responding to prompts ranging from memories, food, robots, plants, pop art, anatomy and in the finale, creating their own gallery with a multi-piece installation in few hours.

Stress-inducing gimmicks known from cooking shows are meant to increase the thrill factor. In each episode, one of the participants will be deselected until in the end, the finalist remains as “best in blow” receiving $60,000 in prize money and a so-called life-changing career opportunity: the residency at the Corning Museum of Glass.

Not the regular and monotonous cooking competition show

On the wave of lots of low-culture competition shows – mainly all about cooking and baking – finally Netflix puts on against the current an artistic competition, where artists are called to create museum-pieces from scratch in only a few hours, which means very little time for a glassblower to: think about a captivating idea, sketch it, realize it and shape it as close as possible to the object they have in mind.

Moreover, you don’t simply have to mix up ingredients or put some cupcakes in the oven: you have to create your own recipe, your own ingredients and probably your “cake” will drop a few times in hundred crumbles (in this case, glass shards) and you have to start over.

Basic and curious knowledge about glass and glassmaking

Starting to watch the Blown Away series could give you some elementary although non-obvious knowledge about glass, for example: where do glass come from?

Not anyone has the answer to that, maybe because he or she has not had the necessity to look at the issue ever before, but it should be in some ways important knowing how glass is made since it is fully part of our everyday life.

Back to the question: it may be hard to believe, but glass is hot sand (which melts at 2000°), mixed with calcium carbonate and sodium carbonate.

Another fun fact relies on some words used by the participants: hot shop and glory hole (don’t take these the wrong way). These unambiguous words mean furnace – where glassblowers work and oven, that’s it!

Few will know that there are several plausible origins of the term glory hole: in an old factory, where smoke and dust were everywhere, a 2100°C opening would have created an illusion not unlike that seen in paintings of saints and angels where “The Glory” radiated from their heads.

A break in the clouds where sunlight passes through is also called a glory hole. However, the term has more recently fallen out of use in the glass industry and the term “Reheating Furnace” is more widely exercised.

Not only aesthetics: during the ten episodes of the first season of Blown Away, the artists show their skills and abilities in shaping an idea rather than a mere good looking object.

Let’s look at this artwork “Meat Me in the Middle” by Deborah Czeresko, a New York-based artist. It consists of a chandelier of meat with a sunny-side-up egg at the center that highlighted her femininity in the male-dominated field of glassblowing.

“While there are more women coming into the glass world now than ever before, it’s important to keep this momentum going and for women to begin occupying a space that’s been historically very macho,” referred Deborah.

It could be a breakfast scene at first, but it is not. Cast-iron frying pan, sausages, hams and a fried egg coming off the pedestal: these objects are riddled with symbolism.

Deborah wanted to make a piece that had elements that exist somewhere between conceptualism and surrealism. “This one’s universal though. It’s like, masculine and feminism. That’s what I want, androgyny” she said.

Eggs are feminized components in her installation, and they have a lot of feminine references as it is sort of the way women are supposed to be, so emotional and soft. But in this case, it becomes this huge, dominating force, which takes over a pedestal and that references women finally taking the art world by storm.

“I see glass as an androgynous material, embodying both masculinity and femininity. It’s sharp when it breaks, and can also be soft when it forms. It occupies all these different states. As a material I connect with it very much in that way” said Debora, explaining her work.

Freak sights of glass you will never expect

As said, each episode is about a different theme, Blown Away reveals in the greatest way how multiform and malleable glass could be. Unexpected shapes and hyper-contemporary art pieces, where colors and concepts mix up together resulting in everything but normal glass.

For example, this is a razor, creatively re-interpreted by the artist K. Momo Schafer, inspired by Yayoi Kusama.

I hope you think these are valid reasons for the show to be worth watching and enough to let yourself be blown away by glass and its magnificence.