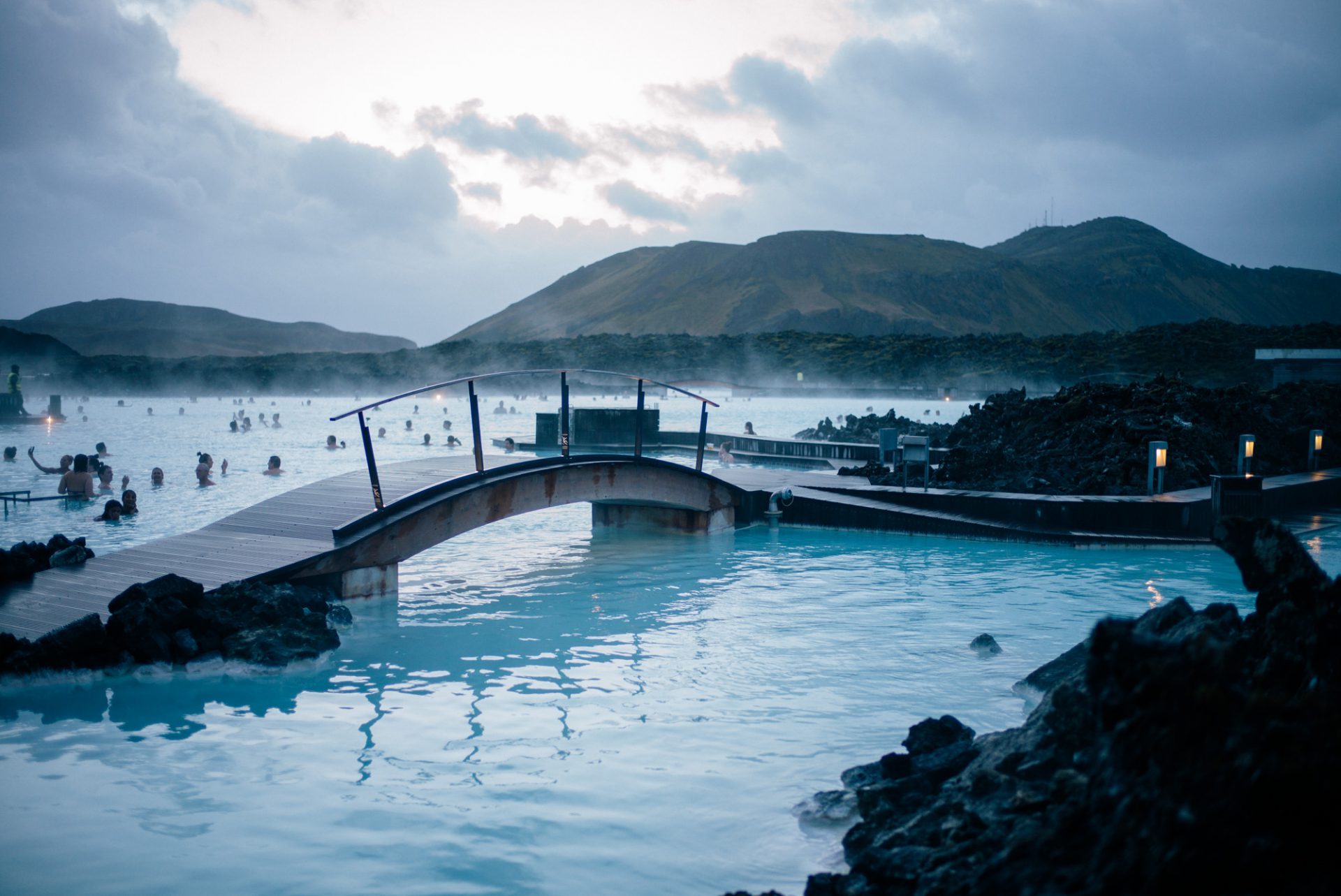 9 million liters of geothermal seawater, an area of 8700 square meters and an average depth of 1.2 meters

Situated in a vast lava plain on the south coast of Iceland’s Reykjanes Peninsula, the Blue Lagoon holds 9 million liters of geothermal seawater, covers an area of 8700 square meters, and has an average depth of 1.2 meters and a maximum depth of 1.6 meters.

The lagoon’s water is sourced directly from the Svartsengí geothermal field and its recirculation interval is 40 hours.

In addition to the sublime pleasures of geothermal seawater, the Blue Lagoon offers: Something more about its Architecture

The harmonic convergence of the manmade and the natural is the defining feature of Blue Lagoon architecture.

Sigrídur Sigthórsdóttir, designer of all Blue Lagoon facilities, is inspired by the interplay of lava, light, moss, and steam – the constituent elements of the Blue Lagoon’s volcanic surroundings:

“I attempted to capture the mystery of the location with the ever­changing play of light and shadow across the lava, the steam from the lagoon and the special light that characterizes the northern part of the world…

Icelandic materials from moss and stones characterize the design. We wanted to emphasize the relationship between nature and the man­made.” Built into a lava plateau on the western shore of the Blue Lagoon, Lava Restaurant, with its bold, exposed lava walls, embodies the unification of nature and architecture.

Endowed with stunning views of the lagoon and the surrounding volcanic landscape, Lava is a sublime setting for experiencing the culinary delights of New Nordic Cuisine. A sanctuary of relaxation and healing, Silica Hotel is comprised of 35 rooms, a private geothermal lagoon, complete spa facilities, and a clinic for psoriasis treatments.

Architected into the heart of the Blue Lagoon lava field, the hotel achieves a wonderful state of harmony with its volcanic surroundings and received the 2007 Icelandic Architectural Award. Blue Lagoon is one of the wonders of the world

Named in 2012 as one of National Geographic’s “25 Wonders of the World,” Blue Lagoon has evolved from its infancy as a reservoir of geothermal runoff into a world of geothermal wonder.

The unique properties of its waters provide not only an enchanting lagoon experience, but also the patented, active ingredients in Blue Lagoon skin care: silica, algae, and minerals.

Blue Lagoon is located in a sprawling, 800­-year-­old lava field in the heart of the Reykjanes Peninsula – a UNESCO Geopark.

Owing to its volcanic provenance, the peninsula is a wonderland of geothermal phenomena. The wellspring of the Blue Lagoon’s beneficial powers lies 2000 meters within the earth, at the boundary of the North American and Eurasian tectonic plates.

In this subterranean frontier of porous lava and searing heat, seawater and groundwater converge, giving rise to a hybrid fluid known as geothermal seawater.

Under immense pressure, this fluid surges to the earth’s surface, integrating the elements through which it passes and emerging enriched with unique concentrations of silica, algae, and minerals – the primary, rejuvenating components of geothermal seawater. In light of the profound healing potential encompassed by the mineral and microbial endowments of geothermal seawater, research & development is one of Blue Lagoon’s core mandates.

Scientists at Blue Lagoon’s research center have pioneered innovative methods for harvesting and cultivating the treasures of the Blue Lagoon’s geothermal environment.

These discoveries have led to a number of patents and a wealth of knowledge in the fields of biotechnology, dermatology, and marine cosmetology.

In the extraction and utilization of geothermal energy, nothing is wasted, and the only byproduct that could degrade the environment – CO² – is incorporated into the production of methane, a clean gas.

More recently, scientists at the research center have discovered ways to cultivate algae with CO² – a significant step in the complete elimination of Blue Lagoon’s carbon footprint.

The geothermal ecocycle not only seeks to mitigate the human impact on the environment, it also aims for social progress and economic prosperity. 2017, time for a bigger experience

Blue Lagoon continues its expansion with the opening of:

The goal is to create a unique environment for experiences that continue to be based on the extraordinary powers of geothermal seawater, the beauty of Blue Lagoon’s volcanic surroundings, and the luxuries of world class service.

The aim is to erase the boundary between nature, wellness, hospitality, and affluence.