The purity and strength of a minimal composition 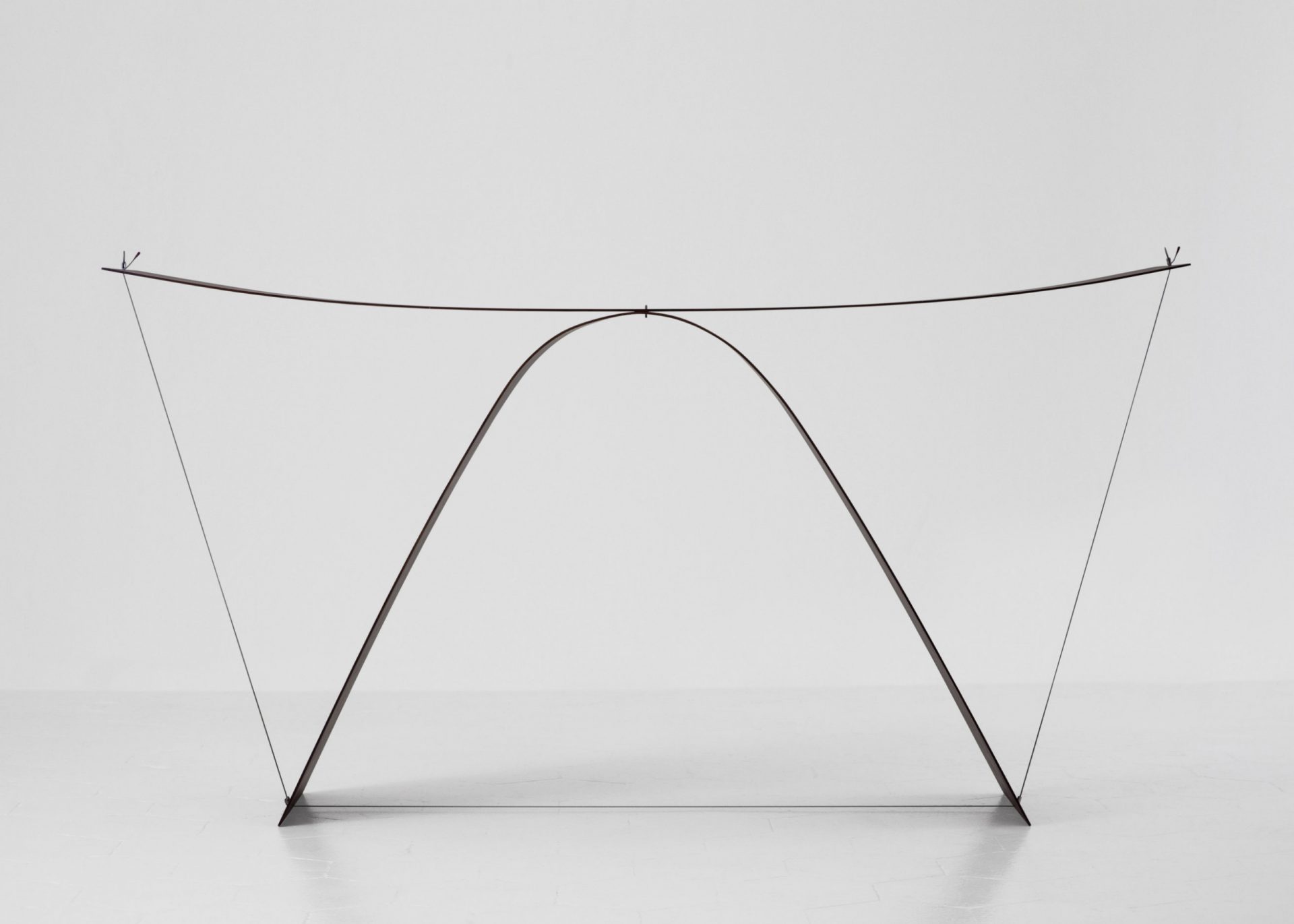 Since the very beginning, Poletti has developed a clear, yet truly personal language.

The simplicity of the forms and the strength of the idea.

This is what we adore in this creation by the Italian artist Guglielmo Poletti. A conceptual and highly recognizable design.

Equilibrium is not just a console

The Equilibrium console is characterised by the very fine profiles of the two elements, which stay in balance thanks to a system of tension triggered by a small gesture. 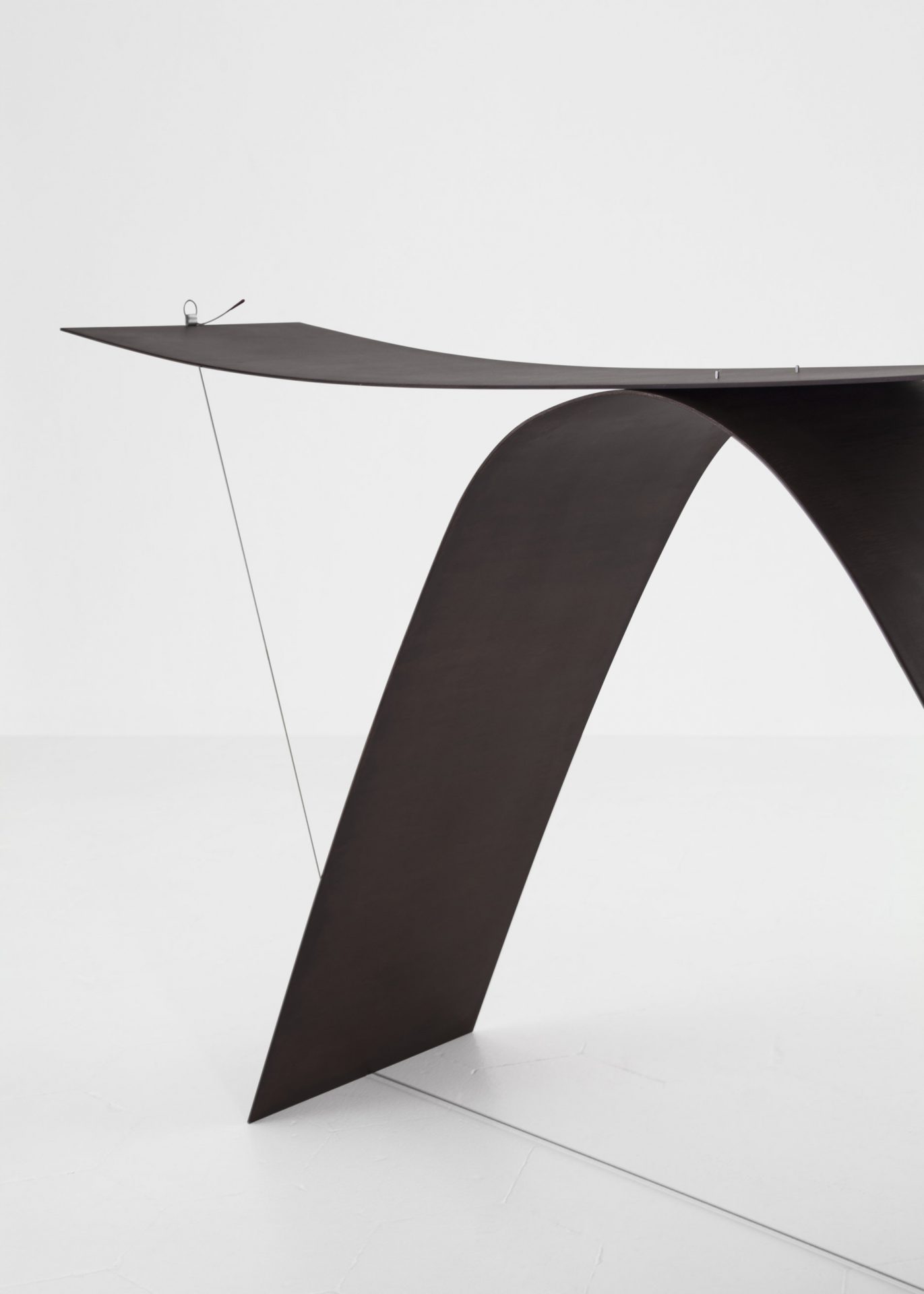 The construction allows the whole piece to be visually very light, going as thin as possibile.

The purity of the minimal composition is deliberately perturbed by the choice of materials and their finish, or by the presence of the small details. 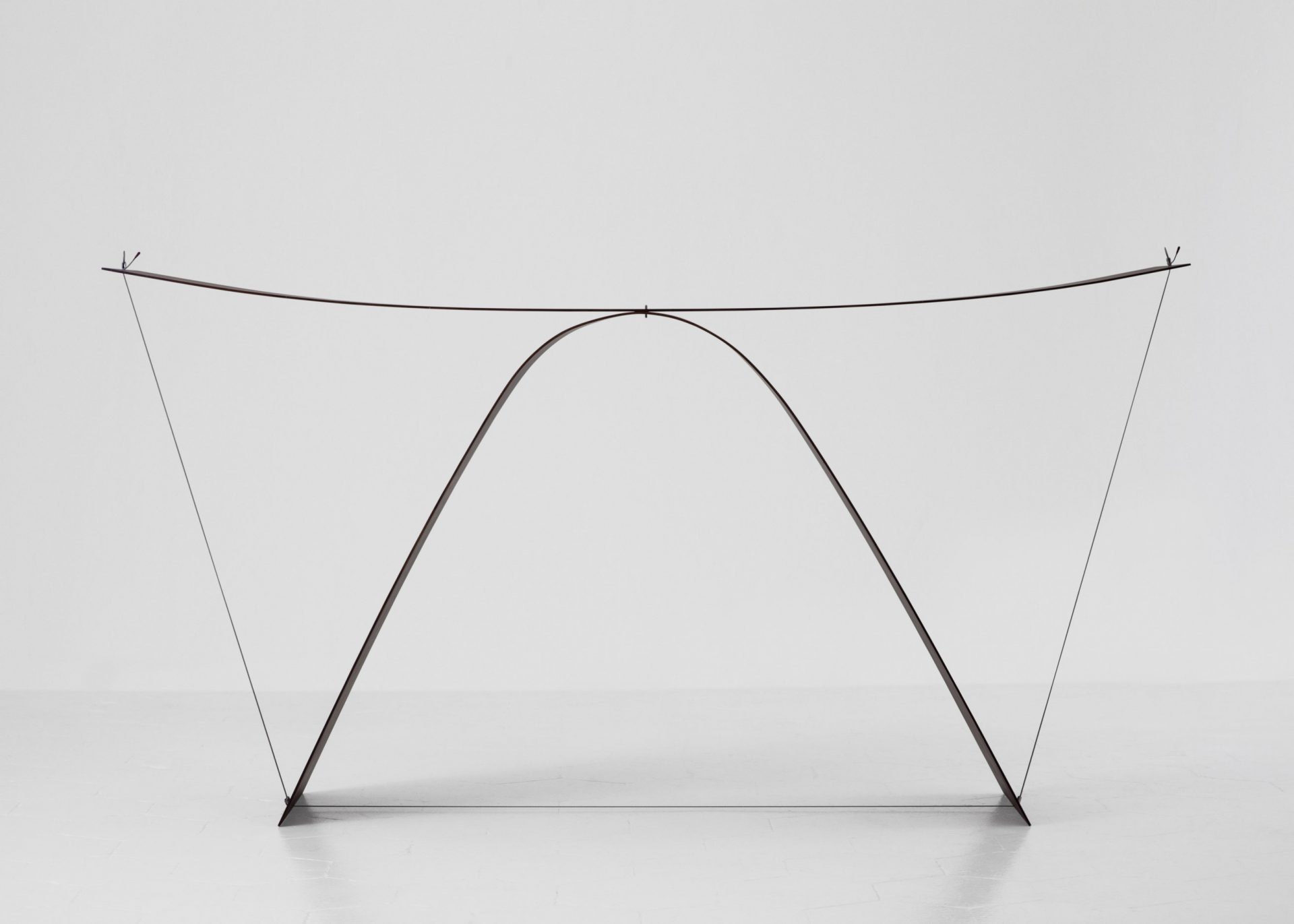 The structure is made out of 4 millimeters darkened Corten steel sheets, which are bent and held in position through the use of a stainless steel cable.

The top element is bent in order to get charged with the tension necessary to close the circuit, from which the drawing of its gentle curves derives.

The two little hammered pins are used to avoid the movements between the two parts. 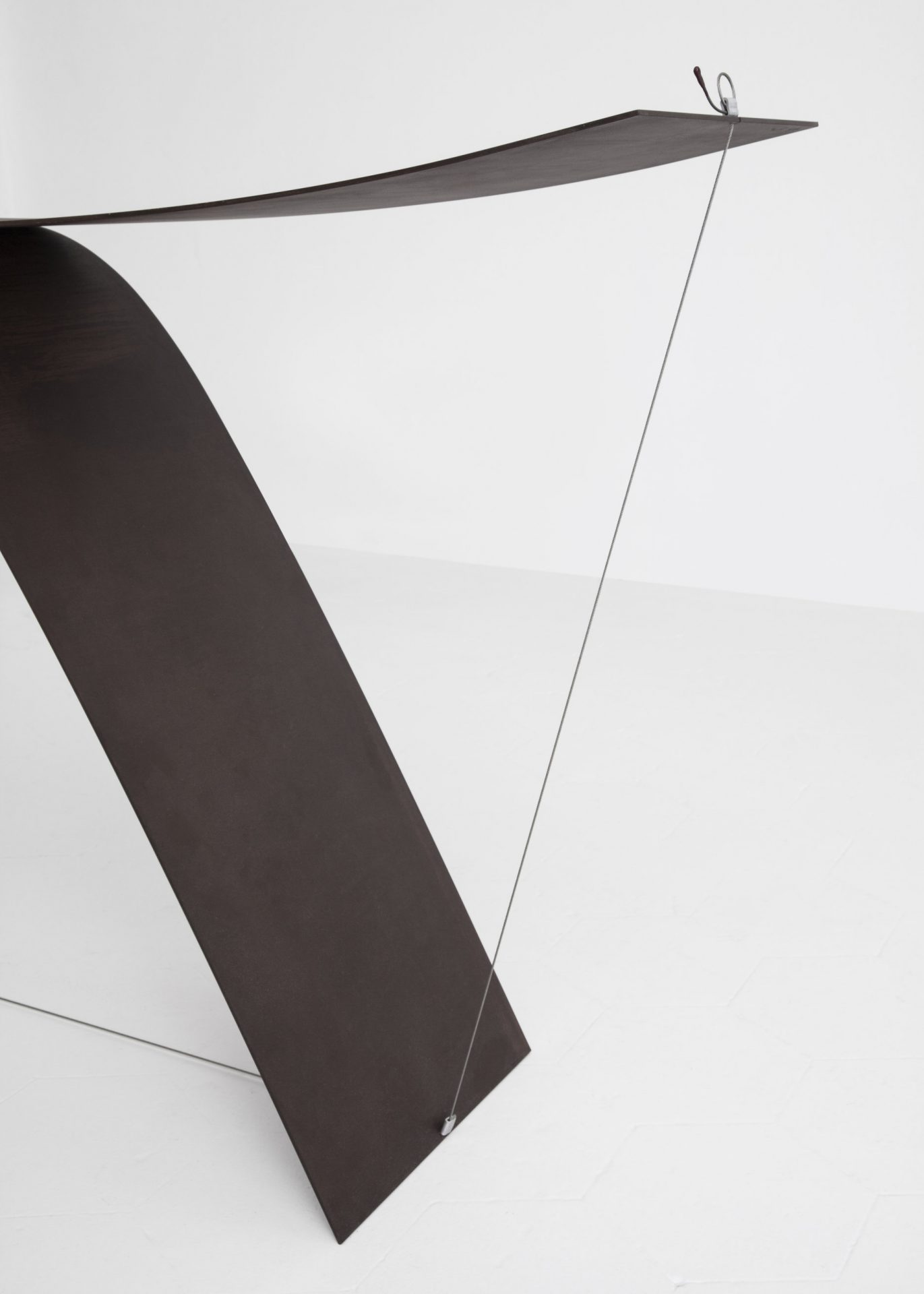 Guglielmo Poletti is an Italian designer.

After the first studies in Milan, he earned an MA in Contextual Design at the Design Academy Eindhoven, where he graduated in June 2016.

Since the very beginning, Poletti has developed a clear, yet truly personal language.

His practice is deeply rooted in a hands-on investigation of materials and their limits, in relation to the notions of balance and fragility.

His simple structures and elementary constructions stand as metaphors of defeated complexity, built around the manipulation of unconventional details. 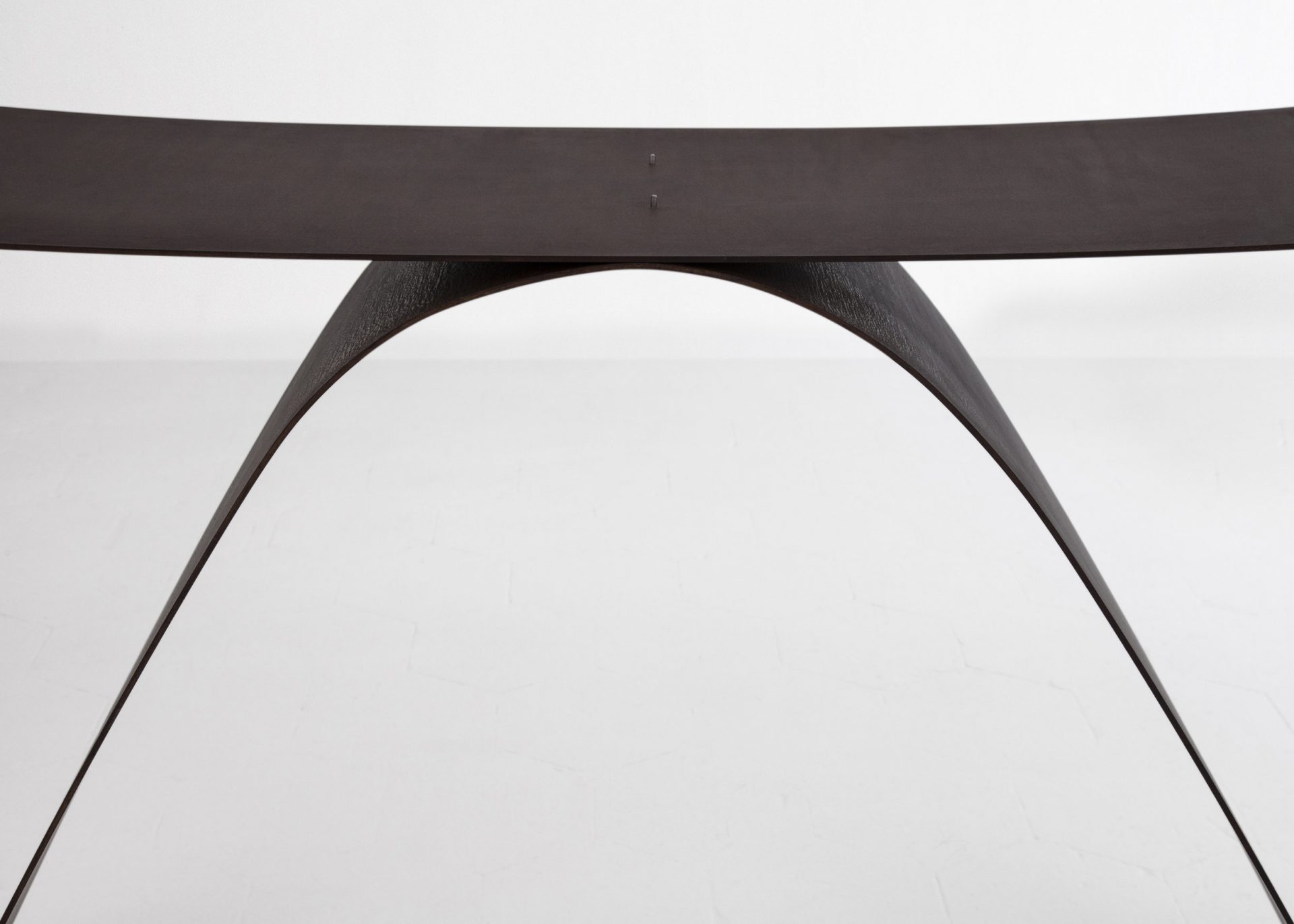 His approach is based on a ‘thinking by doing’ philosophy, which he combines with a good deal of intuition, to produce extremely coherent results.

Poletti’s work has been exhibited in several international exhibitions, such as the Dutch Design Week, the Milan Design Week and PAD London fair with Galleria Rossana Orlandi, and Operæ PHM | Piemonte Handmade with SEEDS London gallery.

In January 2018 he was selected among the six young designers winners of the Italian ‘Rising Talent Awards’ at MAISON&OBJET in Paris.

At the same time he was shortlisted for the ‘Officine Panerai Next Generation Designer of the Year’ – part of the Wallpaper* Design Awards 2018.