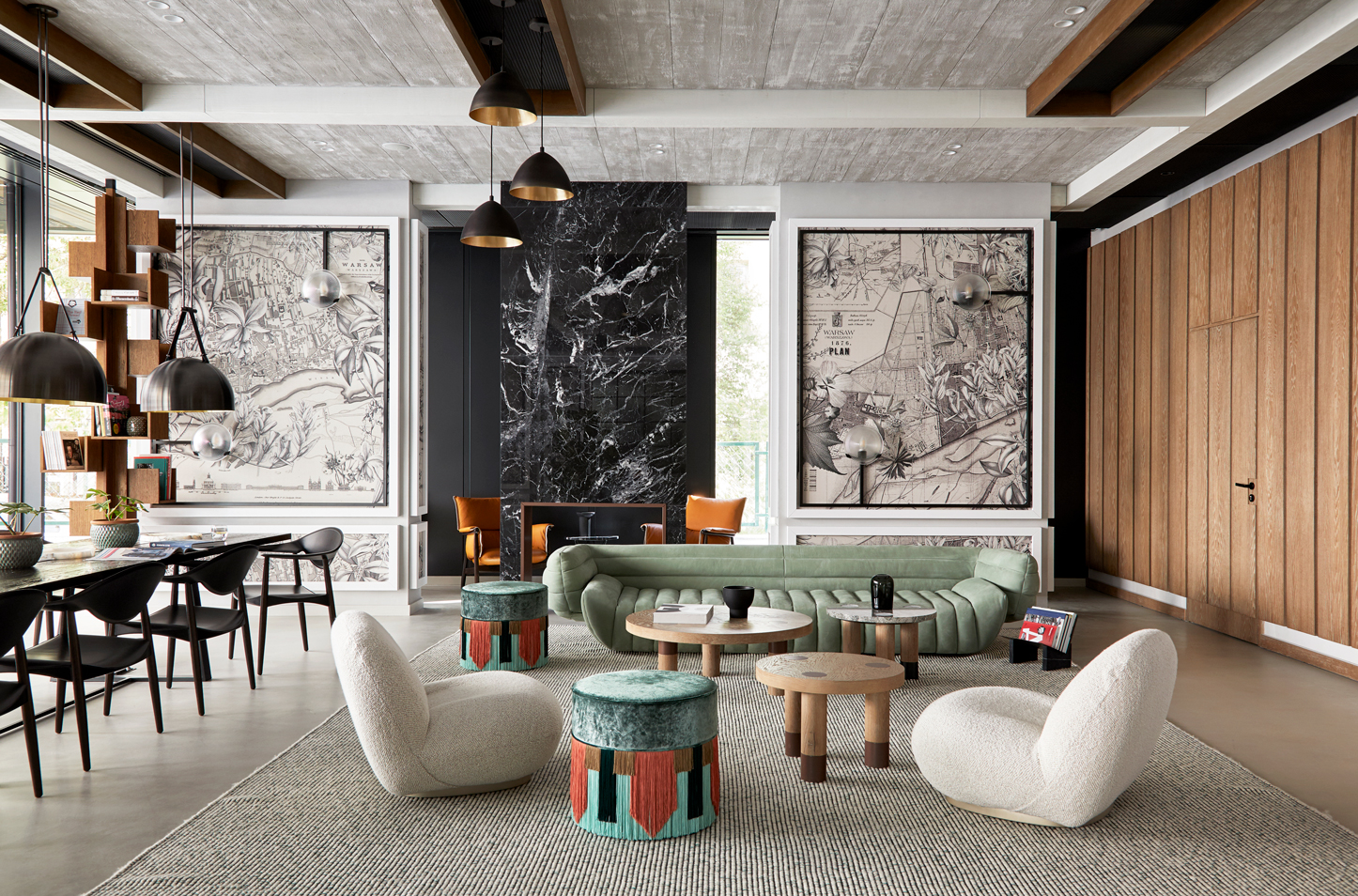 With its inspired synthesis of art, gastronomy, and music, PURO Warsaw is a youthful addition to the Polish capital’s eclectic architectural and cultural scene.

PURO Hotels’ first Warsaw property is located in the heart of the capital city, where a vibrant youth culture continues to reinvent itself as a dynamic force for regional art, design, and music. Sitting next to a signature Los Angeles-designed street mural and the grand socialist-realist Palace of Culture and Science, PURO Warsaw’s form and function distills the essence of a city at the creative crossroads of East and West.

The space’s bright, glass exterior illuminates an innovative interior aesthetic that combines minimalist modernism with custom statement pieces to craft a comfortable living environment for guests of all inclinations. PURO Warsaw’s visual art collection brings together key artists from the capital to showcase the past, present, and future of the city through a series of unique commissions.

For its first hotel in Poland’s capital city, PURO collaborated once again with London-based design studio DeSallesFlint. Much like Warsaw’s own design legacy, the interiors evoke a sense of vintage finesse alongside contemporary simplicity. Each of the 148 rooms (including 6 corner suites and 2 executive apartments) are fitted with hand-tufted rugs from Golran 1898 and speakers from Bang & Olufsen. Guests are encouraged to feel at home among a collection of bold European furniture from Baxter, Moroso, Kettal, Carl Hansen & Co., &Tradition, Gubi, Fredericia and Fogia.

The calm playful interiors and a mixture of boucle wools, velvets and nubuck suede give the upholstered pieces a luxurious tactility, while the open wardrobe design nods to the ‘traveling trunk’, a much-loved symbol of the international traveler. Black-and-white tones blend alongside green accents to reference both the city’s ever-evolving urbanism and its fresh creative vibrancy. This is all housed inside a distinct glass-paneled building designed by JEMS Architekci, forming a dynamic bridge between the downtown district’s traditional tenement houses and emergent modern high-rises.

Amid its pre-war courtyards, communist-era residential blocks and contemporary commercial buildings, the landscape of Warsaw tells the story of a unique architectural heritage. Part of this story is encapsulated in the rooftop Loreta bar through a series of photographs from Nicolas Grospierre’s Kolorobloki, foregrounding the colorful modularity of modernist blocks from the 1960s and 1970s Warsaw. Among PURO Warsaw’s public-space visual art collection are two photographs from Paweł Fabjański’s Autofirecycle, which explore the intersection of human needs and urban psychology. The hotel’s collection continues in each guestroom, with a curation of eye-catching commissions from two local artists. Tymek Jezierski contributes a set of illustrations presenting the intellectual allure of Warsaw to creative Western minds such as David Bowie, Pablo Picasso and Michel Foucault, whose visits to Warsaw were historic. Michał Loba’s minimalist sketches delicately portray feminine figures, while simultaneously making subtle allusions to the city.

PURO Warsaw is home to another distinct eatery in the form of Magari. The ground-floor Italian restaurant sources handpicked meat, cheese, and vegetables from Italian and Polish markets to create a laidback, rustic dining experience. The rooftop Loreta cocktail bar looks out across the downtown district’s iconic post-war modernist skyline and – in a nod towards Warsaw’s once-ubiquitous neon cityscape – offers its own new icon: the pink Warszawianka(Warsaw Girl) neon designed by Maurycy Gomulicki.