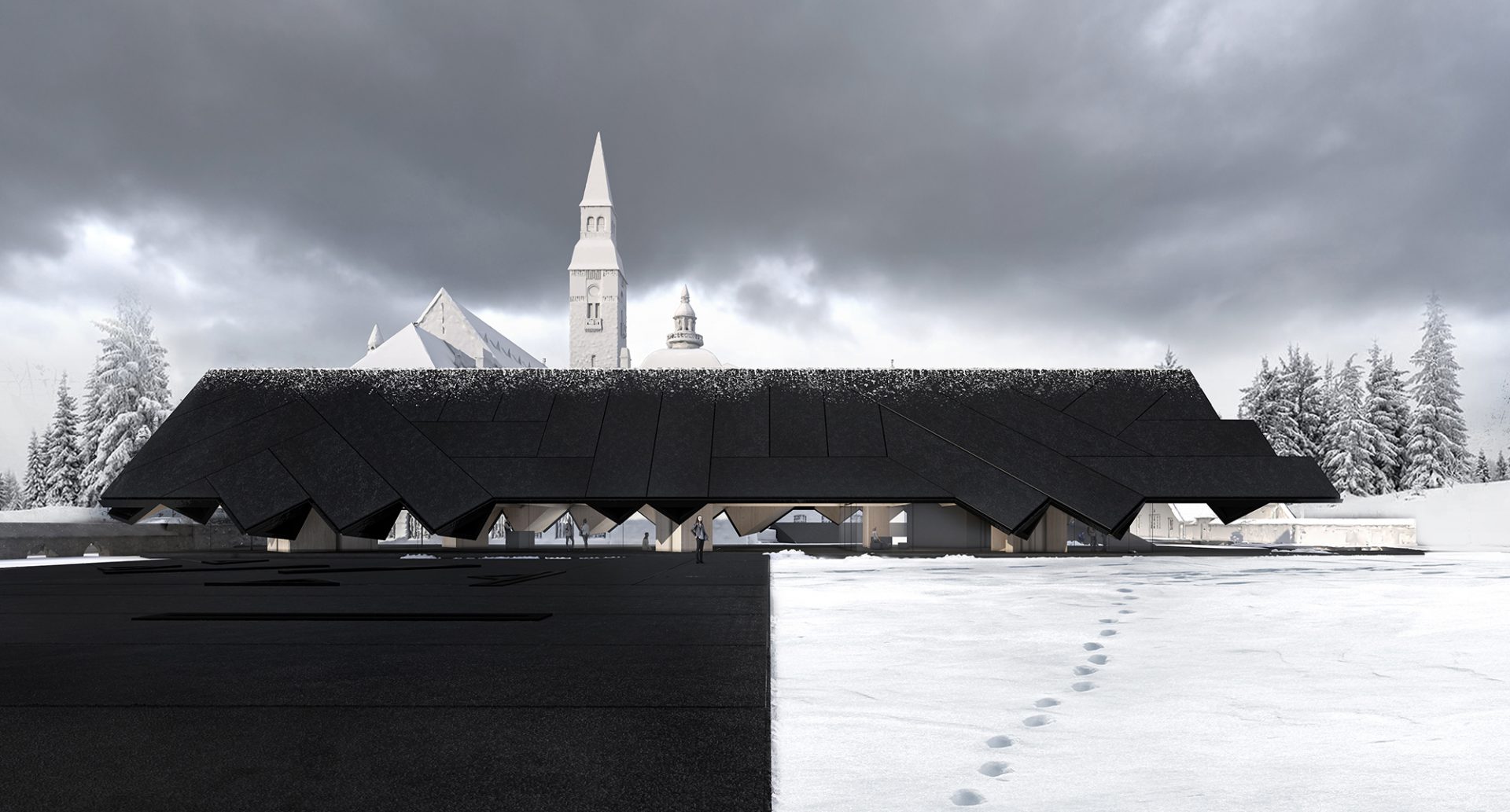 As a response to the international competition for a new museum annex for the Helsinki National Museum, Gilles Retsin proposes a primitive shed composed of chunky robotically manufactured, modular building blocks. The building, inspired by traditional Finnish boathouses, is at the same time deeply primitive and technologically innovative.

On closer inspection, the seemingly archetypical shed has little in common with traditional construction, it’s not constructed, unlike any other gabled roofs. It consists of large-scale cross-laminated timber (CLT) building blocks which are assembled together into in an extra-thick A-Frame, balancing on a few columns.

While there is a high degree of modularity and repetition, there is also a degree of freedom in the arrangement of the building blocks. The elements are arranged in different directions to achieve overall strength, while it also results in a subtle irregularity in the overall shape. Neither unfamiliar nor non-contextual, the shed exists as a silent icon, reflecting the roofs of the existing museum.

The elements are prefabricated off-site from standard Cross Laminated Timber sheets, which are locally produced in Finland. These are then cut and sliced with industrial robots or other, more standard computer-controlled cutting machines. Once cut, the sheets are assembled into building blocks and shipped to the site with standard trucks. This process reduces assembly time on-site and results overall in a reduced, sustainable, and lean production chain. The roof structure wrapped is finished with black ceramic edges, which contain the gutter and drainage and black fiber cement panels.

Overall, the proposal by Gilles Retsin adds two other primitives alongside the Shed: a Square and a Mound. Together, these gravitate around the existing building of the National Museum, continuing it into the surrounding park. The Shed forms the visible part of the new annex, containing the lobby, exhibition space, restaurant, and shop while the Square covers an underground exhibition and event space.

Above ground, it serves as a space for concerts, gatherings, and festivals. Behind the shed, a hard surface mound completes this collection of primordial, basic shapes. A new axis emerges between the shed, the mound, and the museum, producing connections between the National Museum and Finlandia hall across the street.

If you want to find out more about interesting exhibition space proposals, don’t miss Project Proposal: The Biscione Pavilion for Milan by Marchisciana Saverio Adriano.