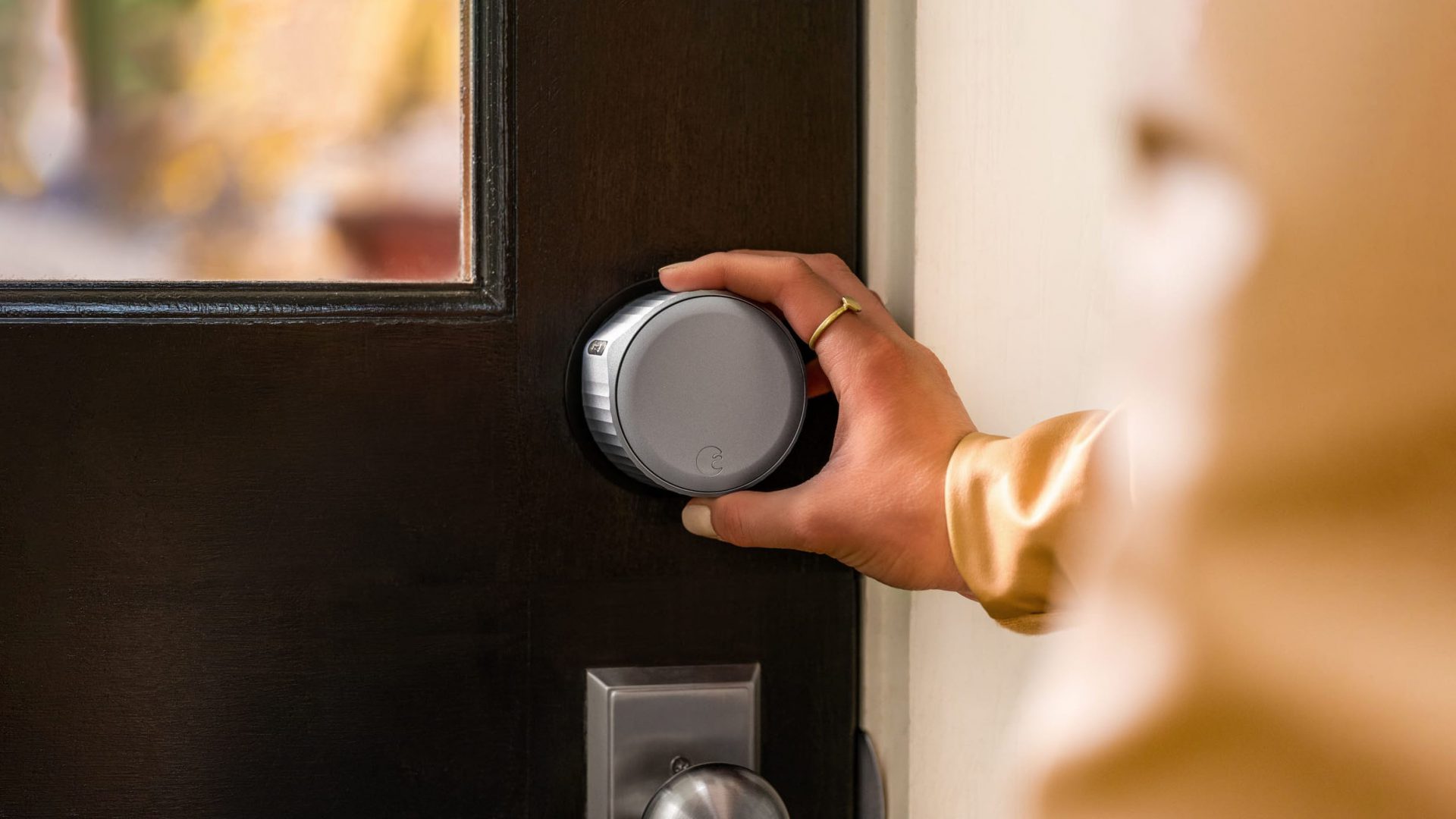 Forget the humble key and discover smart door locks, which can be opened with keycodes, fingerprints, smartphones and more.

Since the beginning of time, humans have had possessions. The only difference is that 2.6 million years ago it was stone tools and today it’s designer clothes, furniture and smart gadgets. Nevertheless, the safety of these possessions has always been important…

In the earliest days, a simple crevice in a cave or a hole in the ground would do the trick for storing animal bones and sharp stones, whereas nowadays the increased value of “stuff” requires something a little more advanced: door locks.

The earliest door lock on record consisted of a wooden crossbar on two wooden brackets mounted on the door and its frame. The next stage in development was the use of a key, which the Egyptians invented some 6,000 years ago.

Locks such as these evolved as a practical solution to the problem of how to open a barred door from the outside, pointing to an invaluable measure of privacy and the securing of personal space. Homes, public toilets, changing rooms: these are all places that would cease to function if their inhabitants or users weren’t comforted by the security of a door lock.

Over time, door locks have advanced to become more complicated as a way of keeping people out. An attempt to remove keys from the equation has seen the invention of push-button locks whilst smart home systems and IoT technology has made digital and smart locks a viable option.

A smart lock lets you create virtual keys and time-sensitive passcodes, so you control who can get into your house, and when. It can also alert you whenever a door is locked and unlocked, using fingerprint sensors to tell parents if their children arrived home on time. They can also lock themselves if you forget to do it yourself.

Smart locks might seem like something straight out of a science fiction movie but they are real and surprisingly convenient. Here is a selection of some of the best available right now.

The Aegis Bosma Smart Door Lock turns any deadbolt lock into a smart lock by simply replacing the indoor portion of the existing deadbolt. It uses a 6-axis sensor to detect whether a door is fully closed or left slightly open. The advanced door lock then sends a notification to let you know.

When opening the door, the Aegis smart door lock uses two methods – fingerprint or facial recognition and powers a Bank-Grade AES-128bit Advanced encryption to provide flawless security. Other features include an accompanying app and Alexa/Google Home compatibility for a total smart home experience.

The August Smart Lock Pro also connects to a front door deadbolt, allowing you to use your keys while also taking advantage of smart home features without replacing the entire hardware set. An app similarly lets you control the door lock remotely, granting guest access, and seeing who got home and when.

The smart lock is packed with security features. It requires two-factor authentication, offering a solid barrier of protection against hacking and a lost-phone feature can disable the August app remotely so no one can access it.

Designed, developed and manufactured by Sony, Qrio Smart Lock is a smart lock that uses a smartphone as a key. On the outside, a minimal design and neutral colour encases the very best encryption technology Sony has to offer.

The connection uses a dedicated app (iOS and Android) and Bluetooth Low Energy, making the Qrio suitable even for places with low reception. It can be installed without removing the existing door lock and works on numerous types of thumb turn locks by using an adjustable bolt turner to fill any potential gaps.

Another great option for those who favour tradition over futuristic front doors is the Netatmo Smart Door Lock. Compatible with Apple’s HomeKit standard, it ships with three physical keys that use NFC to instantly and securely unlock the door mechanism when inserted into the lock.

Once the key is inserted, the mechanism works like a regular key and must be manually rotated to release the deadbolt. There’s no hands-free or remote lock / unlock option, which might be a deal-breaker for many but there is still the option of unlocking the door with the Netatmo Security app.

Quick to fit with excellent integrations, the Yale Linus Smart Door Lock is a simple upgrade for most Euro Cylinder doors. Provided the door meets the required specifications, you can retain standard key access from the outside, while also opening the door with your phone or optional keypad.

With the Linus, you can also access via keyless entry, see who’s coming and when, grant virtual guest keys, and check whether the door is open or closed. All this is made possible via the Yale Access App.

The main draw of the Sesame Smart Lock is that it’s incredibly easy to install. It takes just seconds and can be installed on most single cylinder deadbolts. Simply tape it to your door with a single strip of 3M Command tape without removing or swapping anything. It also has the unique feature of letting you record a custom knock which unlocks the door without needing a phone at all.

Imagining the next generation of smart door locks, Chinese designers Wayne Lu and Wenjie Zheng have created The Handle concept. It combines a pin code with fingerprint access and a traditional door handle, which renders the technology invisible. The fingerprint recognition, for example, is integrated into the reverse of the door handle.

Industrial designer Kaiwen Li has achieved a similar outcome with her smart door lock design. Called Touch, it also uses a touchpad for pin code-access and what looks like a fingerprint recognition feature on the door handle. Similar to The Handle, it packs all of this inside a sleek and slimline design imagining a discrete smart door lock in the future.

Interested in design for smarter homes? Head to AirBird: The origami-style sensor that chirps to warn of air pollution. 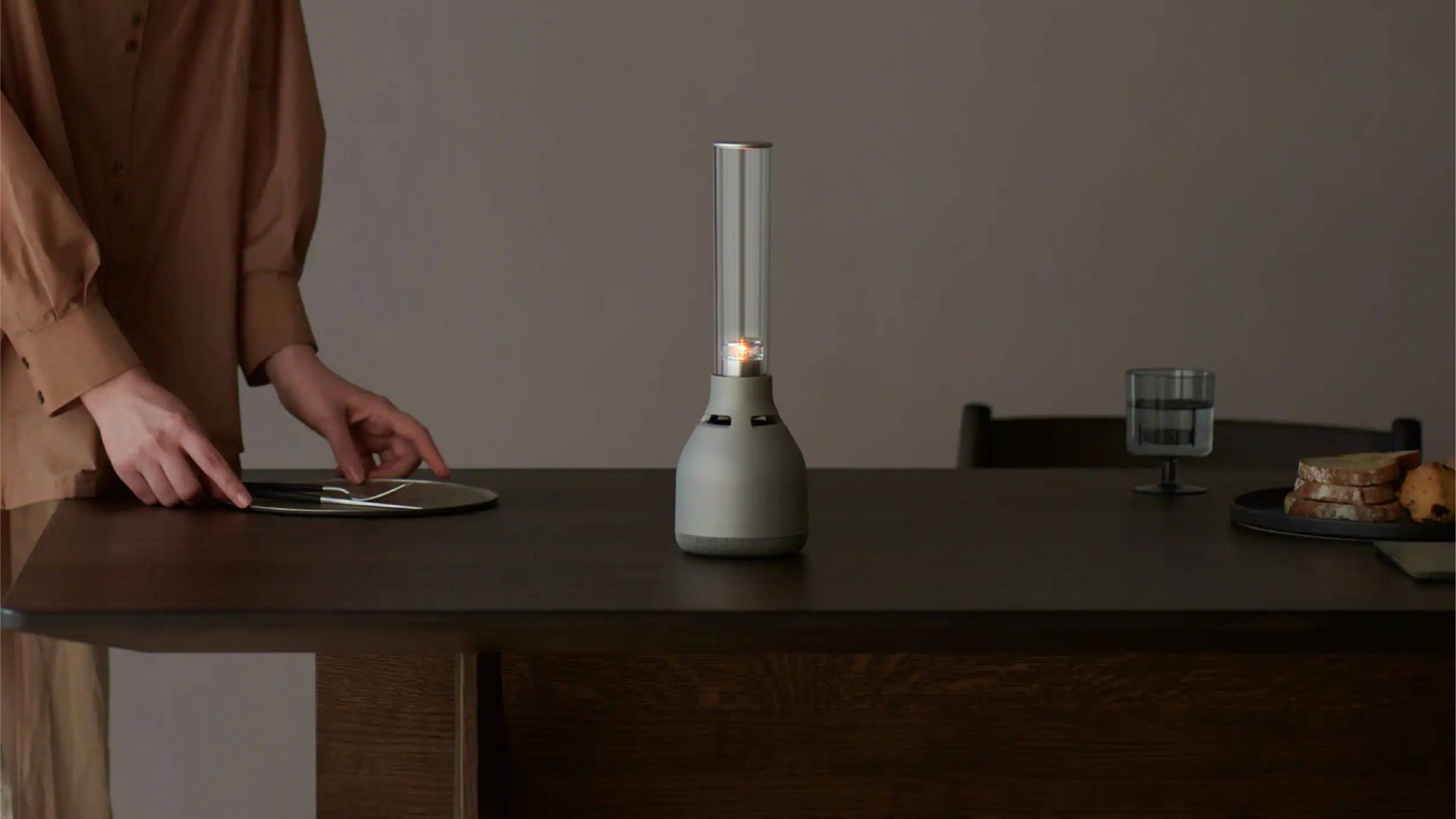 The Sony LSPX-S3 is a portable Bluetooth speaker that resembles a lamp but produces a clear, even sound. If wireless speakers were made two hundred years […] 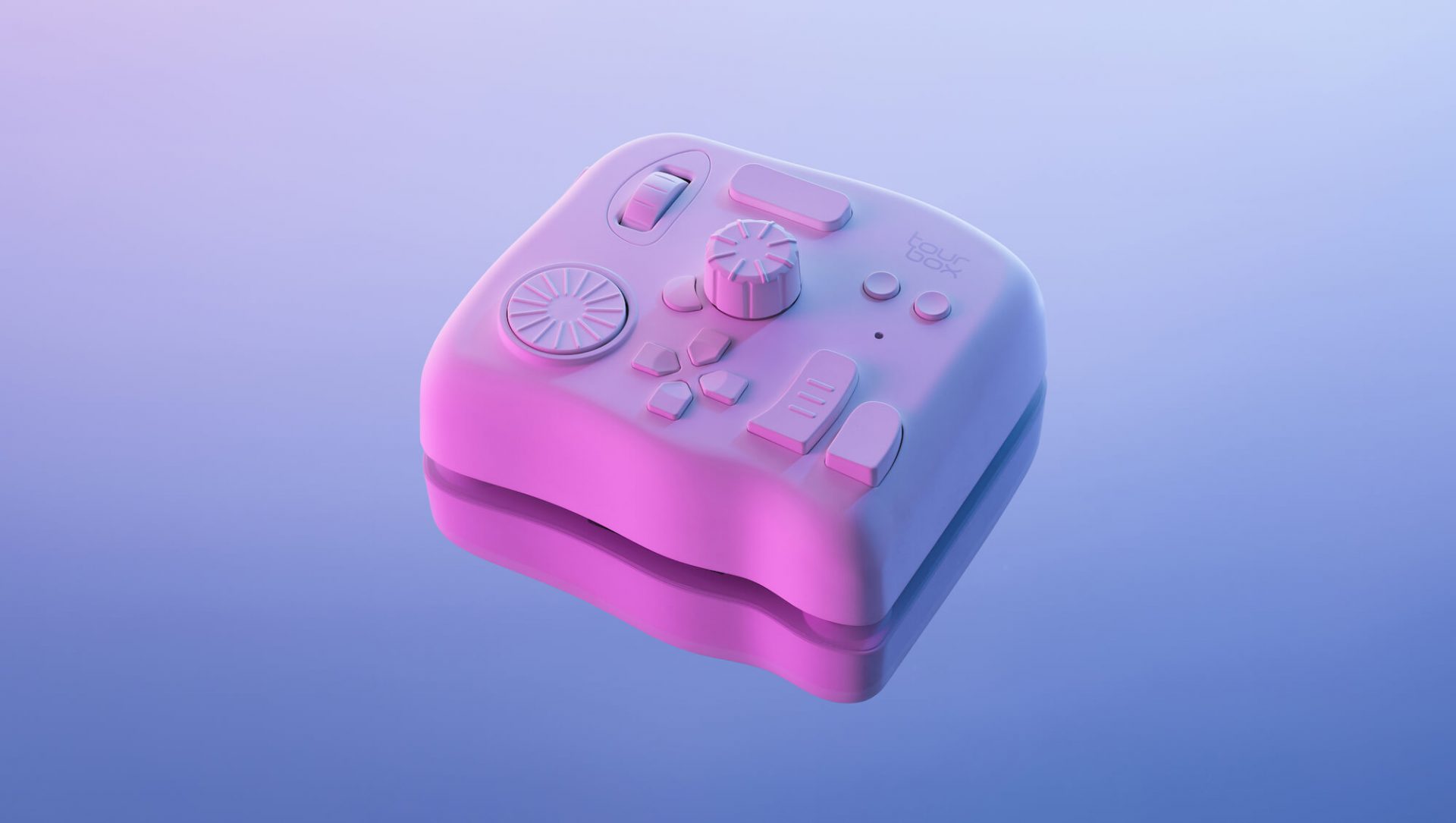 The plug-in editing console replaces the traditional mouse and keyboard setup to offer unprecedented speed over digital media creative projects. Following a successful launch of the […] 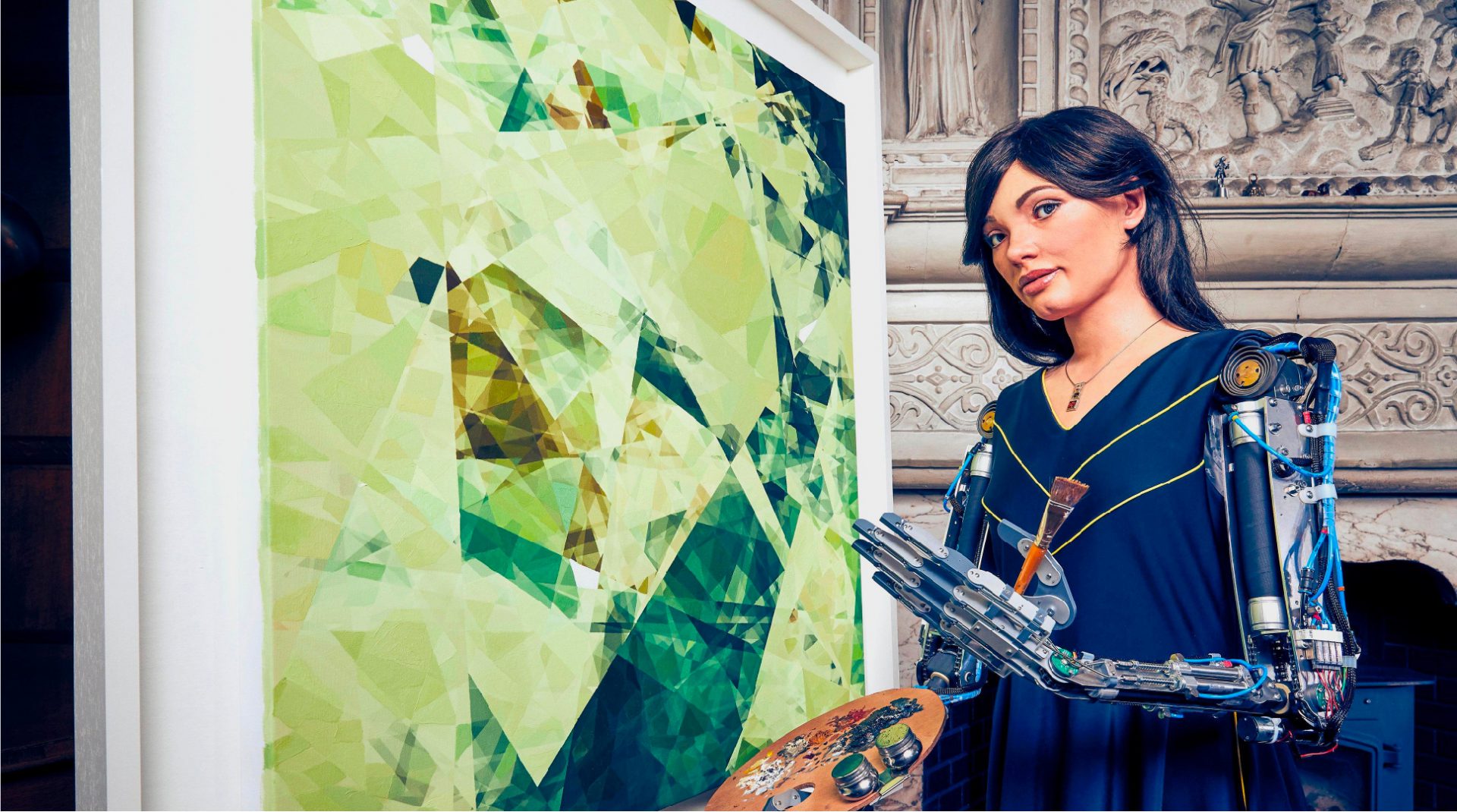 Is Ai-da really an artist or an artistic stunt?

Ai-da is a humanoid robot with mechanical arms and artificial intelligence being entitled as the first AI artist. But is she really? Exhibited in St John’s […]